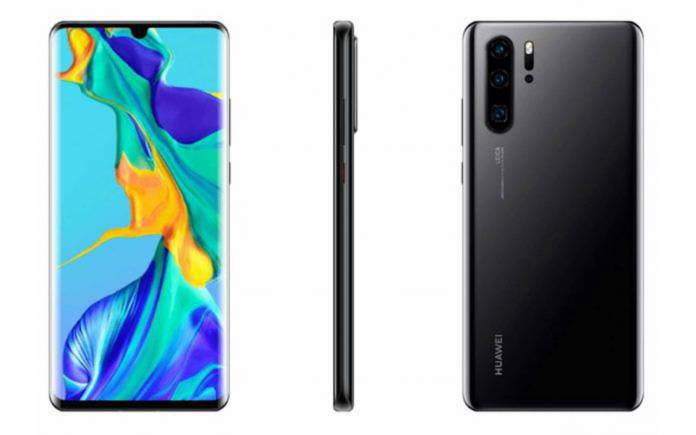 Huawei is scheduled to introduce the latest premium flagship smartphones next week. The P30 and P30 Pro have been our favorite the past few months alongside the already announced Samsung Galaxy S10 phones. On March 26, the top Chinese OEM will make an official announcement in Paris, Huawei P30, Huawei P30 Pro but we’re expecting some leaks and rumors will be revealed before the official reveal. Several renders and illustrations have been shared but here’s another set that features the black version of the Huawei P30 and P30 Pro.

The Huawei P30 and P30 Pro smartphones both feature an almost bezel-less display. The waterdrop notch is still there where the selfie camera is located. We see a flat display for the P30 while the P30 Pro has a dual-curved screen.

The Huawei P30 Pro is similar to the Mate 20 Pro in many ways. When it comes to color options, rendered here is the Black model but there will be Aurora, Twilight, and Sunrise Red editions. The Huawei P30 will be out in Blue, White, and Twilight.

When it comes to cameras, the Huawei P30 Pro will have four cameras. The quad camera setup is said to include a Time of Flight sensor, 40MP main sensor with f/1.6 aperture lens, 16MP wide-angle lens with f/2.2 aperture, and 8MP zoom lens with f/2.4 aperture. Like the latest OPPO flagship, this will feature 10x hybrid zoom.