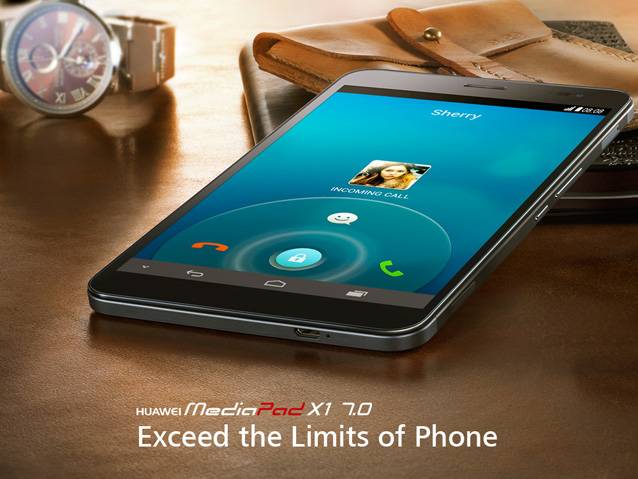 Android tablets that double as humongous phones is definitely nothing new nor unique but for some reason, Huawei still wants in. Trying to unlock possibilities, the Chinese manufacturer believes that its new MediaPad X1 tablet has an edge over others in that device category.

That edge comes via the tablet’s weight and slim profile. Though 7 inches on the diagonal, the MediaPad X1 weighs only 239g. It also manages to cram all its nice hardware into a slate that only stands 7.18 mm thick. That is indeed quite light and slim, enough for Huawei to think you’ll disregard the rather unwieldy width of the tablet and start putting it to your ear and use it as a phone. But even if you don’t, you still have WiFi and Cat4 150 Mbps LTE support to keep you connected.

Aside from that, the MediaPax X1 is actually quite a formidable tablet. It does run on Huawei’s own 1.6 GHz quad-core HiSilicon Kirin910 processor, so actual performance is still unmeasured. It does have 2 GB of RAM to keep things running smoothly and 16 GB of internal storage, expandable with a microSD card, of course. The 7-inch screen is Full HD with a 1920×1200 pixel resolution. The 5,000 mAh battery is said to last 5 days of continuous use on a single charge, though talk time usage will probably drag that number down a bit.

This Huawei tablet will also make for a rather curious mobile camera, should you consider it handy enough to take out of your bag for that purpose. It has a 13 megapixel camera with a f/2.2 aperture at the back powered by Sony’s Exmor R BSI sensor. On the front, however, you have a 5 megapixel f/2.4 20 mm lens that uses Huawei’s own self-focus system instead.

The Huawei MediaPad X1 will have a $548 price tag, at least in Europe, and is expected to launch staring March this year in markets such as China, Russia, Middle East, and Latin America. Given the company’s uncertain future in the country, a US launch is still up in the air.