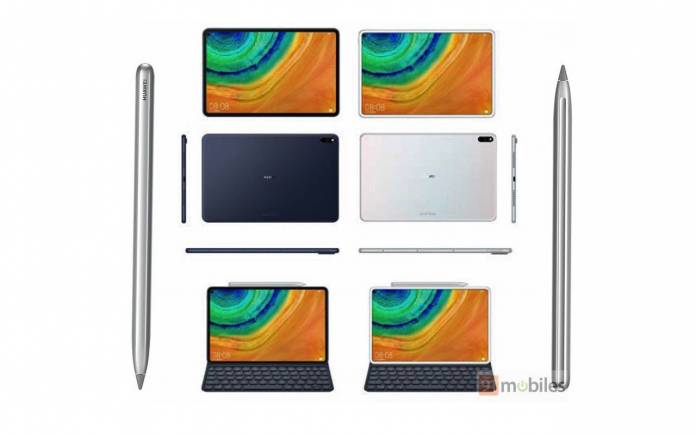 The Huawei MediaPad M6 was only revealed recently but now we’re hearing about a follow-up. There is no official announcement yet but image renders of a MediaPad M7 have surfaced online. Known this early as Marx, this tablet is said to come with a magnetic keyboard and an M-Pen stylus. The mobile device may also feature a punch-hole display so there is a possibility of an almost bezel-less screen. If true, then it’s the first-ever Android tablet with a camera hole from any OEM.

Huawei’s upcoming MediaPad M7 will have a selfie camera hidden under the camera hole instead of a notch. Huawei “Marx” will work with the M-Pen stylus and a smart magnetic keyboard. Looking at the renders, the tablet appears to have very slim bezels. We don’t see any fingerprint sensor anywhere which could mean an on-screen fingerprint reader may be implemented.

The tablet shows a camera module shaped like a pill. There are protruding dual cameras plus LED flash. The speaker grilles are at the bottom with a USB Type-C port at the center.

A Black or White Huawei MediaPad M7 can also be expected as before. We don’t think there will be a 3.5mm headphone audio jack though. The MediaPad M6 tablet had it but was placed on the left corner. No information on other specs and features but the stylus pen could be attached magnetically to the tablet and maybe wirelessly charged as well.

Possible specs could be a maximum of of 8GB RAM, Kirin 990 processor, up to 256GB of onboard storage, and a larger battery. We’re looking at flagship-level specs because Huawei can do it even at such an affordable price.