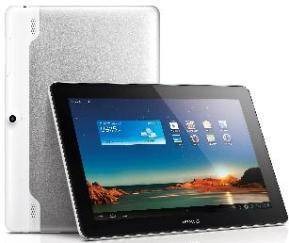 Huawei is no stranger to the realm of Android tablets, and it may be ready to give the 10-inch market another spin with its new MediaPad 10 Link. Notebook Italia has uncovered Wi-Fi and Bluetooth 3.0 certification documents for such a device, which suggest that Huawei has a new slate up its sleeve. Unfortunately, we don’t know very much about the MediaPad 10 Link at the moment, but there are a few morsels of information that are worthy of a mention.

First and foremost, it appears that there will be three different versions of the MediaPad 10 Link, with three different model numbers – S10-201w, S10-201u, and S10-202u – listed in the documentation. The difference between the models are unclear at this point, but it’s possible that some of the models will come with support for mobile data networks while one might be a Wi-Fi only version.

We know from these documents that the Huawei MediaPad 10 Link has been certified for dual band 2.4/5.x GHz Wi-Fi and Bluetooth 3.0. The documents also tell us that the tablet will come equipped with a 10-inch IPS LCD screen displaying at an HD resolution, but specifics weren’t mentioned. The tablet is also expected to be running an unspecified version of Android, though Notebook Italia is guessing that will be Jelly Bean. Finally, the Bluetooth certification gives us an image of the tablet (which you can see above), but unfortunately the quality isn’t all that great.

So, what we’ve heard of the Huawei MediaPad 10 Link so far isn’t too bad, but admittedly there are still quite a few gaps left to fill in. For now, just know that it appears Huawei is working on a new 10-inch tablet that will probably come in a few different varieties. We’ll keep an ear to the ground for new details, so keep it here at Android Community for more information!