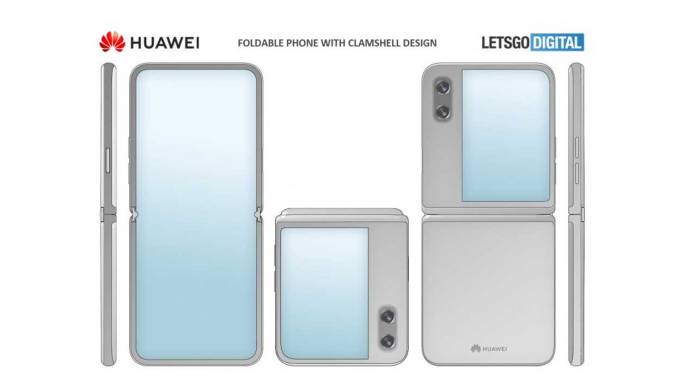 There are a handful of 5G foldable smartphones on the market already. A trend set forth by Chinese smartphone manufacturer Huawei’s Mate X is now a domain that South Korean tech giant Samsung rules with different types of flexible screen phones. To pose some worthy competition to Samsung’s Galaxy Z Flip, Huawei possibly has a 5G foldable smartphone with clamshell design in the works, as revealed through recently published patent documents that the company had filled with China National Intellectual Property Office (CNIPA) in April earlier this year.

According to the documents spotted by LetsGoDigital, Huawei’s alleged foldable smartphone will have a form factor reminiscent of the Motorola Razr 5G and the Galaxy Z Flip. The phone will flip open from bottom to top instead of the book-like design of the foldable phones we have come to appreciate more.

As seen from the images of the Huawei flip phone, there is a relatively large cover display – external screen if you may, with a dual camera setup alongside. More screen real estate means more space to show notifications, messages etc. When folded open, the phone is seen to have a long, narrow screen, which should be relatively more comfortable for single hand usage.

Interestingly, the full screen on the inside has no visible cutouts for a front camera or a fingerprint sensor. This hints at the possibility of Huawei trying to introduce in-screen selfie camera and fingerprint reader to foldable phones. Hinge of flexible screen phones is a notable aspect that makes or mars the design aesthetics. The images show Huawei is managing the hinge to fit snugly in the case, without leaving a visible trace on the screen when fully open.

There are only three physical buttons one can spot in the images – these are volume rockers on the left and a power button on the right side. No visible evidence of what ports the Huawei foldable with clamshell design would have. Suggestively, the phone is in works, but we are presuming it’s not going to land anytime soon – 2021 maybe? We’d love to wait!