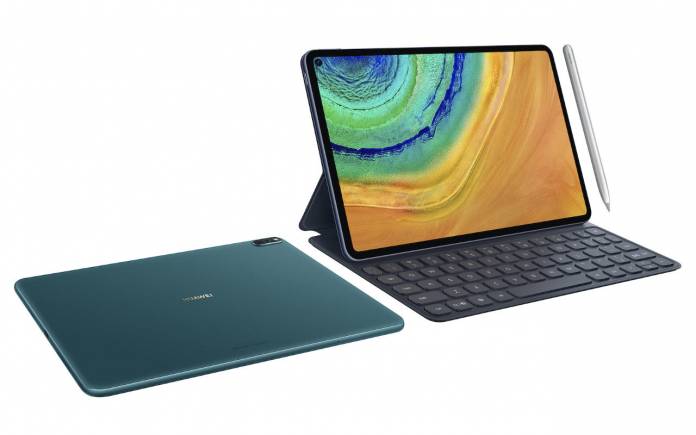 While Chinese manufacturers have mostly outgrown their “imitate Apple” phase, there are times when something may be too good to pass up. Then again, there are only so many ways you can design a tablet but very few will deny that Huawei’s latest slate unabashedly looks like Apple’s. That is until you look closer and see the almost literally wart on the Huawei MatePad Pro’s face in the form of a punch-hole camera cutout.

That hole in a corner of the screen is what gives the MatePad Pro what Huawei boasts is a super thin 4.9mm bezel, resulting in a 90% screen-to-body ratio for its 2560×1600 10.8-inch screen. Inside, it comes with the Kirin 990 but 5G support is optional and only on specific models. There’s 6 or 8 GB of RAM and 128 or 512 GB of storage. The large 7,250 mAh battery not only supports 15W wireless charging but even 7.5W reverse wireless charging.

The differences with the iPad Pro end there. In addition to a strikingly similar design, Huawei’s new M-pencil (not the previous M Pen) magnetically docks to the top of the tablet both for storage and charging. There’s also a magnetic keyboard that, sadly, also only supports two angles. Huawei could have iterated on the design to provide a better experience but perhaps opted for a more similar implementation instead.

Huawei could have also gone beyond Apple and equipped the MatePad Pro with dual cameras. But, instead, it chose to go with a singular 13 megapixel sensor with an f/1.8 lens. The large bump makes room for an LED flash only.

That said, Huawei may have been trying to target affordability over features, with the Huawei MatePad Pro launching for 549 EUR ($600) in April. The 5G model, on the other hand, will retail for 799 EUR ($870). Of course, don’t expect Google Play to be present here either.