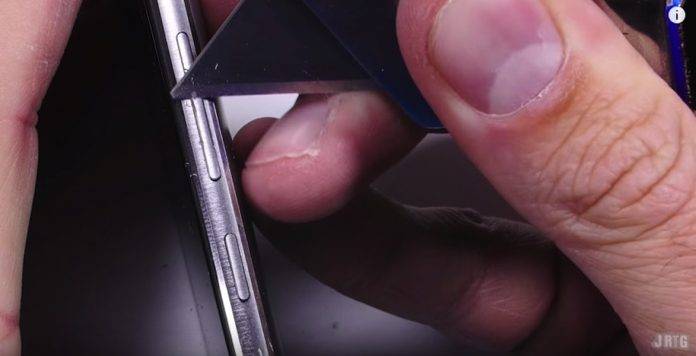 We have a feeling that Zack Nelson isn’t a big fan of Huawei if we are to base our opinions on his test videos of phones from the Chinese OEM. His Shelf of Shame includes two Huawei phones already. Now, he is more curious with this Mate 9 especially that the phone became a bestseller last year. As with any other durability tests, “Jerry” scratched, burned, and bent the Huawei Mate 9.

One good sign that the device will survive are the screws at the bottom which means it is easy to repair. It’s an indication that the rear panel is attached to the frame. Phone seems to be structurally secure because of that.

SCRATCH TEST. Huawei has added a screen protector out of the box. We’re assuming so it won’t scratch easily. With the Mohs picks level of hardness, the Mate 9’s screen scratched at level 6 which is normal. Coins and keys won’t have an obvious effect on the display.

The Mate 9’s camera is protected by a screen glass so it also doesn’t scratch. Huawei decided to use a metal earpiece for this model which is good. The holes are small so rocks won’t easily get inside.

The phone is definitely made of metal which is good since you know it is durable enough. The dual camera lenses are also covered by glass while the laser focus is covered by plastic. Fingerprint scanner scratches easily but is not damaged at all.

Also made of metal are the sides and buttons of the Huawei Mate 9, making the phone really solid. There’s some plastic though on the bottom and top of the back panel which is for the antenna.

BURN TEST. The display turned a different color after nine seconds of intense heat from the lighter. It will return to its original state after a few seconds.

BEND TEST. Such usually checks the build quality and structural integrity of the mobile device. Luckily, this one survived on the first round. It’s still intact, thanks to the screws found at the bottom and the back panel frame. There’s only a minor flex to the frame which Zack said can be corrected.