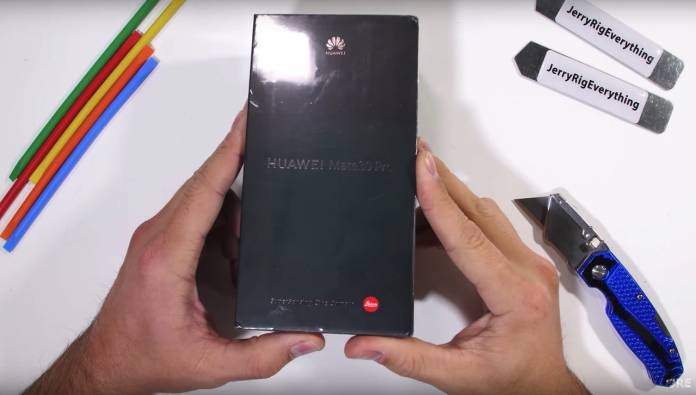 There is no giving up for Huawei. We know that because the top Chinese OEM is still working on its next premium flagship series. The Huawei P40 is highly anticipated now and we expect it will be the next hot topic once the Samsung Galaxy S20 and Galaxy Z Flip are out. The Huawei Mate 30 Pro was released a few months ago amidst the US trade ban but it quickly gathered positive reviews. It ranked the highest on DxOMark. A teardown analysis revealed that it’s front and glass back is prone to breakage.

A durability test has finally been done by JerryRigEverything. Zach Nelson has been wondering why the phone is still banned. It’s not really NOT allowed in the US. You can use one while in the country but don’t expect any customer service support. It may be difficult to own one if you depend on Android apps from the Google Play Store but people still buy it.

Upon unboxing, a beautiful display greets you with its wrap-around endless screen. The Horizon display makes it almost bezel-less. The power button is placed on the rear of the device. At the back, there is a circular camera module similar to the OnePlus 7. Moving on to the scratch test, the Mate 30 Pro’ screen covered by Gorilla Glass 6 scratches at level 6 with deeper grooves at level 7.

The sides show about 50% display because of the curve. In front, it’s almost bezel-less and full-glass since most sensors are underneath.

There are no volume buttons either. You need to tap on the side for the volume slider to show up—not a good idea according to Zack Nelson. At the bottom, you will see NO headphone jack but there are the USB-C port and a SIM card tray.

Onto the burn test, the 6.5-inch OLED screen lasts 25 seconds under the heat of the lighter. It doesn’t leave any mark as the screen recovers immediately. As for the bend test, this part will not leave you heartbroken. Bend the phone from both sides also doesn’t do anything to the phone except prove it is one well-built device.