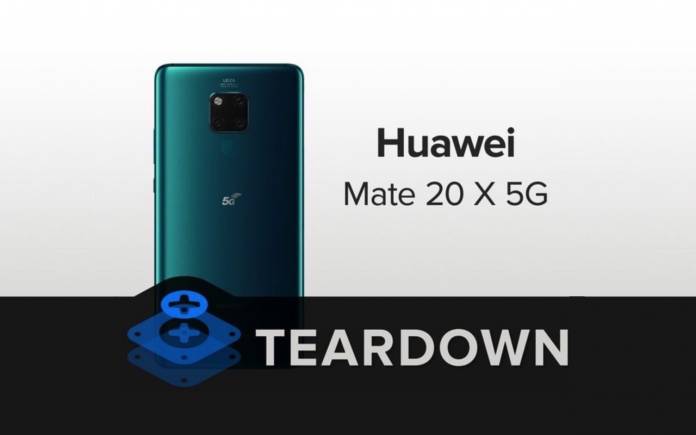 The Huawei Mate 20 X is released as another variant of the popular Mate 20. The phone was introduced last year as a bigger version of the Huawei Mate 20 Pro. It comes with a larger 7.2-inch screen with a bigger 5000mAh battery. As described, the phone is massive and very powerful with the Kirin 980 chipset. It’s big and yet maintain its cool, thanks to the Graphene Film and Vapor Chamber Cooling System. The device also offers IP53 water and dust-resistant rating so you won’t have to worry.

Before opening the phone, let’s take a look at the usual features. We see a USB-C port, speaker grille, and a pair of microphone holes at the bottom. On top are another mic hole, infrared blaster, and an earpiece speaker. The 5G branding is obvious on the back so you can easily identify it’s a 5G phone.

Opening the Huawei Mate X 5G is easy. No heat was needed to open. The suction handle is enough to separate the back panel from the device. A few screws hold the antenna, NFC coil, and graphite heat conductor pad. Remove the screws and then disconnect the fingerprint sensor you see.

The motherboard comes out easily so you can also remove the triple camera system. When it comes off, we discover the following:

The phone is low on repairability score although numerous components are modular. They can also be replaced independently. The midframe covers the fingerprint sensor and battery connectors. The camera sensors and flash block it. The display is glued-down so it’s a bit challenging to start.