The third quarter has ended and the financial and industry reports are all just coming in. While the smartphone industry has shown robust growth, the biggest performer of all is Huawei, who has surprisingly managed to climb up to third place in market share at the expense of LG.

Huawei has just proven its might by shipping 12.7 million smartphones in the third quarter this year, almost double the 7.6 millions it sent out in the same period last year. This has caused its market share to rise to 5.1 precent up from last year’s 4.4 precent. This not only shows the popularity of its Ascend P6 and G610 smartphones, but also demonstrates the strength in numbers of the Chinese market. Of course, it remains to be seen if the Chinese manufacturer will be able to maintain its foothold, as LG is following not far behind with 4.8 precent of the market, having shipped 12.7 million smartphones this quarter. 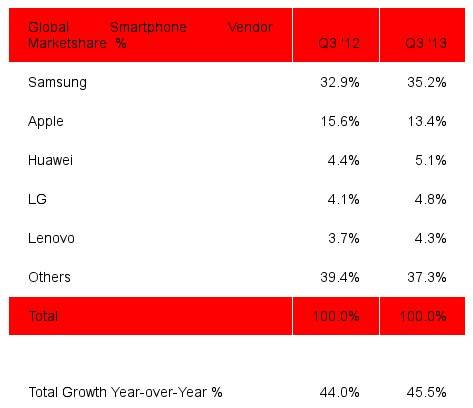 Overall, the smartphone industry is pretty much in good shape. Total global shipments have reached a new record of 251 million units, a 45 percent increase from last year’s 173 million units during the same quarter. Of course, the top dog in the business is still Samsung, grabbing 35 percent of those shipments with 88.4 million units. Apple has lagged considerably, with only half of that number at 33.8 million. The Cupertino-based company’s market share has also dipped slightly from 15.6 percent in 2012 to 13.4 percent this year. It is, however, expected to make a recovery as demand for its newly launched iPhone 5s grows. 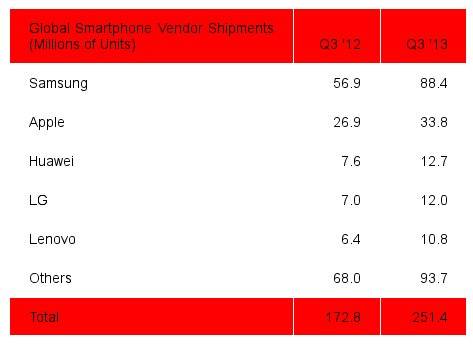 Of course, these figures from Strategy Analytics only cover the volume of smartphones that are shipped by the manufacturers. A different metric is needed to gauge how many of these devices actually land on users’ hands. These figures are also expected to change drastically in the coming holiday season, when the demand for electronic devices usually surge.