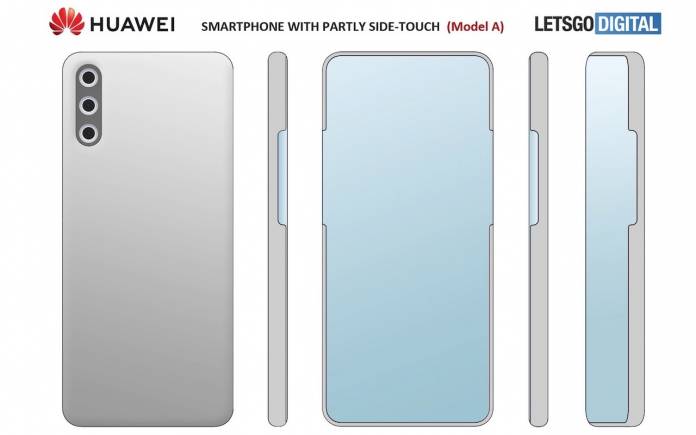 Here we go again. Here are some details about a mysterious phone coming with an under-screen camera. Well, there is no official confirmation yet but Huawei is believed to be releasing a phone in the near future with an under-screen camera display. The top Chinese OEM is discovered to have filed a patent for a budget phone with a selfie camera under the display. The patent is also said to include virtual buttons that may be accessed and pressed from the side.

Huawei is still the top Chinese OEM and is now the Top 2 mobile brand in the world after Samsung. It may not overtake the South Korean tech giant anytime soon because of the US trade ban that was implemented last year but the company is still going strong. There is no stopping Huawei from coming up with premium flagship and mid-range phones even without Google’s involvement.

Huawei has a number of bestsellers and premium flagships. The more expensive phones have proven their performance. The next models may even gather more attention if the under-screen camera is implemented.

The patent file and images we’ve seen features a special phone model bearing an under-screen camera. The file is already with the CNIPA (China National Intellectual Property Administration). It was actually filed in November 2019 but was only published last June 16. It’s also listed on the World Intellectual Property Office (WIPO) already.

We see a Huawei phone with a full-screen display and narrow screen edges. You won’t see any punch-hole or notch because the under-display camera tech is almost ready. The phone also comes with a side touch display that can work as virtual control buttons.

The under-screen camera phone appears to have a flat display. The camera setup consists of three shooters. It may also be a dual-camera system with an LED flash.

To make things interesting, we’ve also heard display manufacturer Visionox may be supplying the screens to Huawei but we’re taking things with a pinch of salt. If not the Huawei Mate 40, then maybe the Huawei P50 due next year will apply the tech. We’ll see.