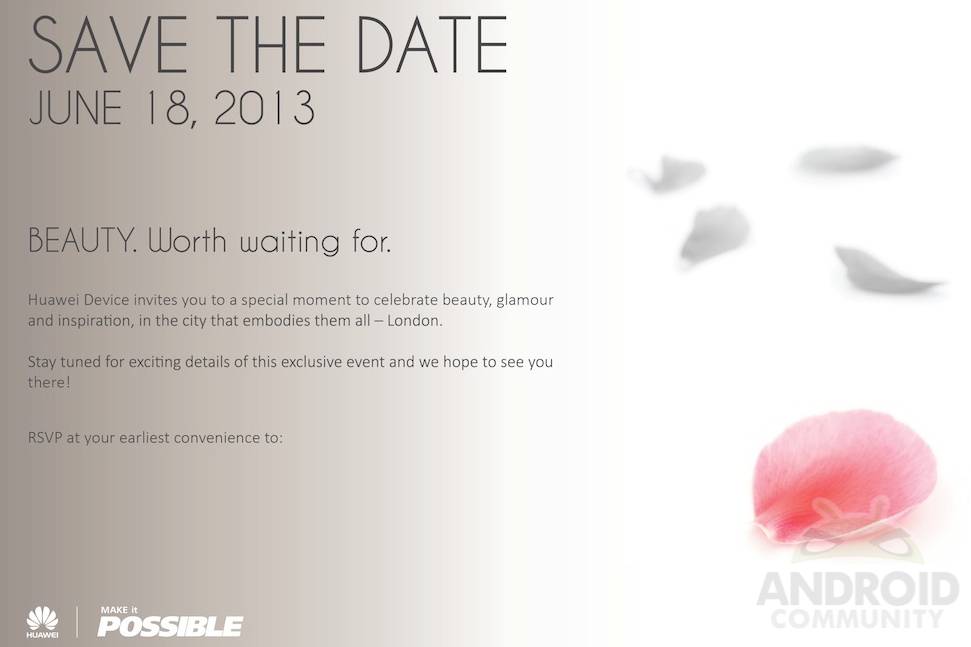 Today Huawei has just announced and begun sending out media invites for an upcoming beauty event taking place in London, where we expect them to showcase their latest and greatest smartphone for 2013. Stating that they’ll be celebrating beauty, glamour and inspiration on June 18th in the city that embodies them all – London. So what will we see? Read on to find out.

Huawei has been rather quite the past few months after releasing that massive 6.1-inch Ascend Mate phablet back at CES. While we’ve seen plenty of rumors and leaked devices, nothing is set in stone. However, back in January reports surfaced about their own custom built 8-core Cortex-A15 processor to take on Qualcomm, and Samsung’s Octa-core chip and more. Could that be the beauty we’ll be seeing?

Chances are we won’t see Huawei’s new 8-core processor quite yet, but instead they’ll be announcing and showcasing what many have been referring to as the “world’s thinnest smartphone.” A title other Huawei phones have held in the past, only to quickly be beaten by other companies. This week we saw a look at their brushed metallic wrapped Huawei Ascend P6, which is the thin phone we’ve been waiting for.

Leaks have revealed a thin and all aluminum Huawei Honor 3, as well as that ultra-thin Ascend P6 smartphone, so either could be the star of the show here from Huawei. Showcasing their latest design, newest products and more all with sleek and ‘beautiful’ designs at a beauty show in London. Makes sense right?

If Huawei manages to pack an 8-core processor into the “world’s thinnest” phone, the Ascend P6, we’ll be surprised and that will surely be something worth mentioning. Stay tuned as we learn more details leading up to their event next month.