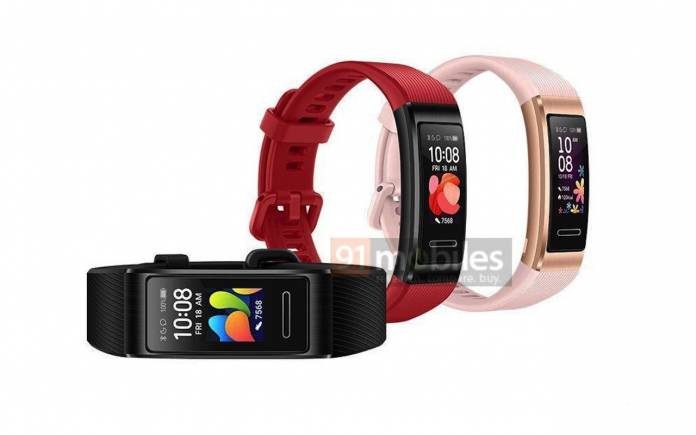 The Huawei Watch series is more popular compared to the Huawei Band line but the latter is getting a new addition. We only remember featuring the Huawei Band 2 Pro Fitness Tracker a couple of years ago and mentioned the Band 3 Pro was being offered free with the Huawei P30 Lite earlier this year. There is no official announcement yet but the wearable market can look forward to the Huawei Band 4 Pro. An exclusive image render has surfaced online, giving us an idea of how the new health and fitness tracker from the top Chinese OEM will look like.

A Huawei Band 4 Pro render was shared by 91mobiles which is fast becoming a great source for such things. The wearable device looks a lot like the Huawei Band 3 Pro but we’re assuming specs are upgraded.

The Huawei Band 4 Pro may come with a color touch AMOLED screen and a silicone strap. A power adaptor may also arrive with it to charge the device. We don’t see a bezel-less screen but the straps could be interchangeable and adjustable.

When it comes to specs and features, rumor has it the Huawei Band 4 Pro will come with an SpO2 meter to measure amount of oxygen in blood, a built-in heart rate sensor, and ten new watch faces. The unit may come with a USB port hidden in the strap instead of an old charging connector. The 100mAh battery from the Band 3 Pro may be improved on the Band 4 Pro but we’re expecting the 5ATM waterproof level to remain.

As for the wearable platform, we’re not sure if this one will run on Wear OS due to the current challenge Huawei is facing in the US. Let’s wait and see for the official announcement from Huawei.