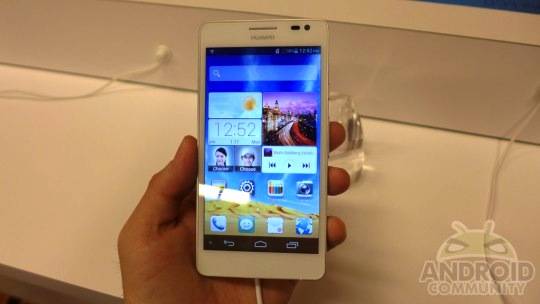 Many have been focused on the Ascend P7 Sophia, however that isn’t the only flagship level device we are expecting from Huawei. The company currently has the Ascend D2 (pictured above), and rumor has it that we may be seeing the follow-up device announced later this month during Mobile World Congress. The device will be the Ascend D3 and it is expected to arrive with an octa-core processor.

Details coming from the Huawei News blog point towards the Ascend D3 as having the newest in the K3V3 processor line. Specifically, the processor is looking like it will be the HiSilicon Kirin 920, which will clock in as a 1.8GHz octa-core. Further processor related details touch on how it will function similar to what we have seen from Samsung.

That is to say the processor will be octa-core, but that it will function as two sets of four. In this case that will mean a 28nm architecture based on ARM’s big.LITTLE setup with a quad-core Cortex A7 and quad-core Cortex A9. Other still unconfirmed specs for the Ascend D3 include a 5-inch 1080p display, 16 megapixel rear-facing camera and thickness of 6.3mm.

Aside from this talk of the Ascend D3, we are also expecting Huawei to announce a smartwatch during Mobile World Congress. There wasn’t much in the way of details on the watch, but there was some additional talk about the Ascend P7. Basically, Huawei made it clear the P7 was not going to arrive during MWC, and would instead be the focus of a special event later in the year.