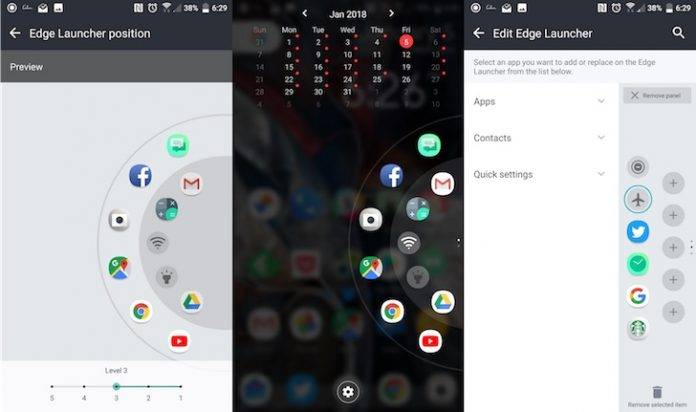 It’s not the most popular or the most acclaimed new thing that has come out of HTC, but the Edge Launcher, which they introduced with their new HTC U11+ is somehow unique. It lets you access a customizable circular menu of apps and actions when you squeeze your device. The latest update now gives users more options to customize what they see on the circular menu and also allows you to squeeze your phone even when it’s on lock screen.

The update to the Edge Launcher now lets you change the position of the apps and actions that you’ve added to the rotating menu. All you have to do is just tap and hold and drag to wherever you want the icon to be placed, just like you would on your normal screen. Plus, other actions can now be added, including battery saver, auto rotate, and Wi-Fi hotspot quick settings. With just a squeeze and one hand, you can activate them or any of the apps you add to the launcher.

The updated version also now lets you activate the Edge Launcher even when your screen is locked. Previously, you had to unlock it first before you can squeeze, but now all you have to do is squeeze first, then choose the app or action. However, once you’ve chosen what to use, you will still have to unlock through fingerprint or pattern or pin to be able to actually use it. You can use Trusted Places or a similar service if you want to not go through the whole unlocking thing.

If you want to experiment some more with the Edge Launcher, you can access the beta menu in its settings, where you can also activate specific actions within apps just by squeezing your phone. You can assign what action can be triggered with a squeeze by tapping on the screen once an app is chosen. You can update the HTC Edge Launcher from its Google Play page.