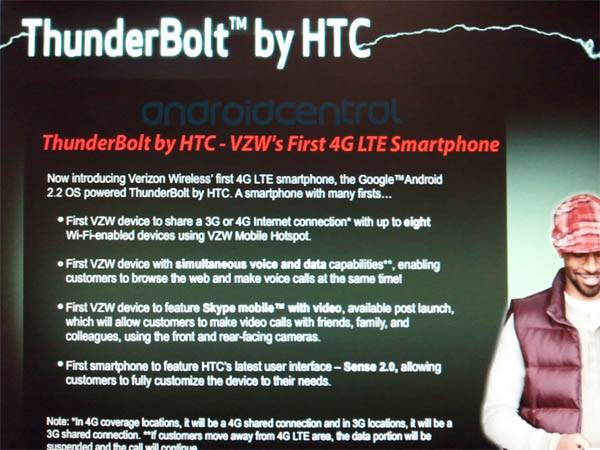 Say what? If you’re on T-Mobile or AT&T or Sprint, you’ve never heard of this before – non-simultaneous voice and data? That’s wacky! Up until now this sort of thing was not available to Verizon customers, but it appears as though it’s about to be, and on the HTC ThunderBolt on their 4G LTE network no less. Seems kinda like this should have always been a feature… right?

The image you see above, provided by a source to A.Central, also notes that the ThunderBolt is the first Verizon device to be able to share it’s 3G or 4G connection with “up to eight” wifi devices with its mobile hotspot feature. They note that this is the first Verizon device to feature Skype mobile working with it’s front-facing camera, and that it’s the first smartphone to feature HTC’s Sense 2.0, allowing customer customization – sure, sure it does, suuure.