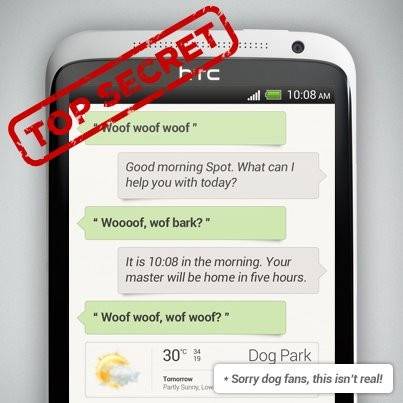 It looks like HTC has been having some fun this afternoon at the expense of blogs and HTC Android fans everywhere. Tossing up a picture on their official Twitter teasing an upcoming S-Voice and Siri rival voice assistant program — only for dogs. Everyone quickly jumped on it thinking the dog part was just a cover but yes, this was indeed fake.

Between Apple’s Siri and Samsung’s new S-Voice the voice helpers on mobile devices has been a hotly discussed topic as of late. Google is preparing their own codenamed Project Majel that we’ve heard will be shown off at Google I/O next week as Google Assistant, so this was pretty good timing HTC.

HTC’s “Top Secret” new voice assistant was looking very similar to Siri and other options, being able to take appointments, share weather alerts and all that jazz but we have a feeling they’ll just wait for Google’s Assistant to arrive with Android 4.1 Jelly Bean. After posting the photo there was a wave of comments, speculation, and posts popping up everywhere but it appears this was indeed a fake for “pet week” — confirmed by Jeff Gordon at HTC.

Whether HTC is working on their own Siri voice assistant rival or not is still unknown. This could technically go both ways and they are just calming the waters for now. What do you guys think? Something that got out of hand or did the internet and Android world just get Rick Roll’d by HTC?