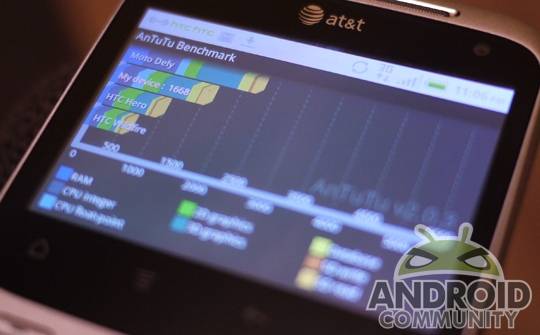 Welcome to our official Facebook Phone review – at least that’s what they’ll have you believe if you’re in the AT&T store. What I’d bill this phone as is the greatest little keyboard in the West that just so happens to have a Facebook button below it and a display that’s just a little bit too small, but certainly bright and sharp. I come from an environment where I basically skipped over the BlackBerry era and went straight to 4-inch and above displays, so keep that in mind when you take this trip with me down Android way on a device that’s by no means perfect, but shoot if it isn’t pretty looking and nice to hold.

The week this review is released, we’ve also officially launched our Device directory, located at http://device.ac/ – with this directory we’re able to attach statistics from any device on to the bottom of any post. In this case, we’ve got the HTC ChaCha attached to the bottom of this HTC Status review because ChaCha is the first name this device was given. Check out the full specs below!

Taking the hardware aside on its own, this device is one of the most comfortable to hold handsets I’ve ever had the pleasure of checking out. I think you’ll find in the early reviews of the Euro version of this device, that is the HTC ChaCha, many will say the same thing: and boy what a keyboard. This device has what’s called a Chicklet keyboard, meaning the keys are sort of shaped like the tiny gum candy, clicking upon pressing in a lovely and perhaps even cute way. All of the keys white areas are semi-transparent so they can be back-lit. 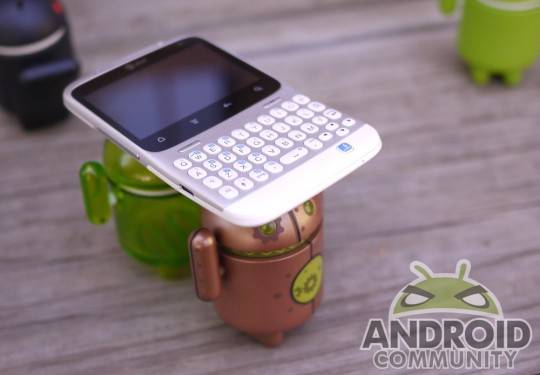 Then there’s the battery cover. Much in the same way the battery cover comes off of the HTC Flyer with a bit of a push down to unhinge the cover before easily sliding it off, the HTC Status has three panels on the back, only the bottom one meant to be removed. Those who are actually able to get the battery cover off are legendary, as the commenters on the one video on YouTube showing you how to get the cover off will tell you. Essentially we’re gonna go ahead and say: don’t try it. The only things under there are the SIM card and the battery, and more than likely you’ll have no need to get those out any time inside the lifespan of this device. 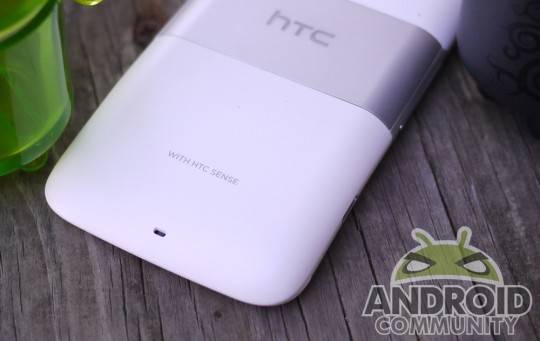 The display is bright, but small. The resolution is large for how large this TFT display is at 480×320 pixels for a 2.6-inch screen, and certainly you’ll have no complaints about the sharpness, but if you’re used to having room to play games or do any other sorts of advanced activities via apps on your screen, you’ll have a tough time adjusting. On the other hand, if you’re upgrading from a feature phone with an even smaller display, you’ll think this is fantastic. 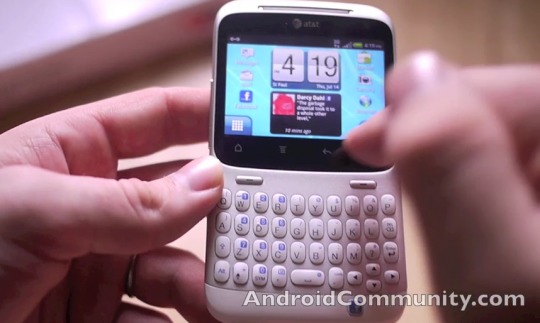 The front facing camera is just fine for video chat and recording yourself talking if that’s your sort of deal, the back-facing camera is pretty excellent for 5-megapixels. Below in the camera section of this review you’ll get a look at a few pieces of media we’ve collected. Your Facebook button is the piece of this device you’ll be using to work with Facebook, several functions being built in for its use, each of them listed in the special Facebook Button section of this review.

For special Facebook-centric items, you’ve got a lovely Friend Stream widget (essentially the same one you’ve been working with on HTC devices for the past few months,) a Facebook widget which essentially amounts to the same thing as Friend Stream except relegated to Facebook, and Facebook Chat, which is basically a list of all your friends on one of your home screens – tapping a friend brings you to a very basic text-only window in which you’ll be able to Facebook Chat with the friend in a very basic way. 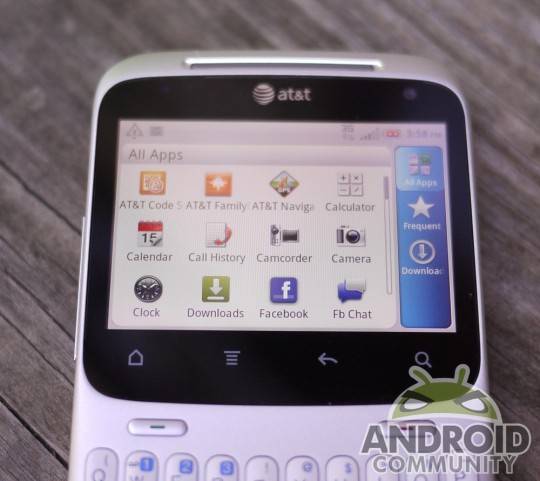 Beyond that, you’ve got a basic set of Google apps plus a few AT&T additions and an app screen that has a side-menu that has you deciding on All Apps, Frequent, and Downloads. This same sort of screen appears when you’re looking at your galleries of photos and movies, and the same is true with Music. You’ll be encountering this sort of content on the left, menu on the right sort of situation throughout this device. You’ll either love it or hate it, more likely than not based on what kind of phone you’re used to using. If you’re coming from a device with a much larger screen, you’ll have a tough time adjusting – and I’ll say that again before the review is done. If you’re coming from a feature phone or, god forbid, a landline, you’ll think the screen is giant and glorious. 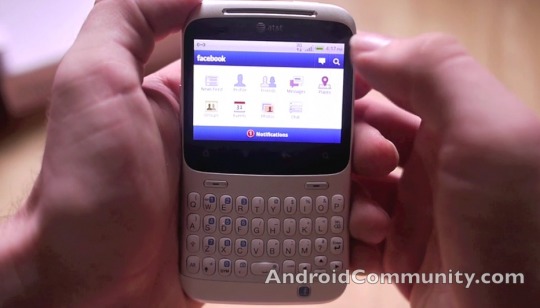 As for performance on this device, check out these benchmarks. Certainly this phone isn’t the top gun when it comes to power, holding all of its stock in hardware and the unique nature of its display setup in its user interface. 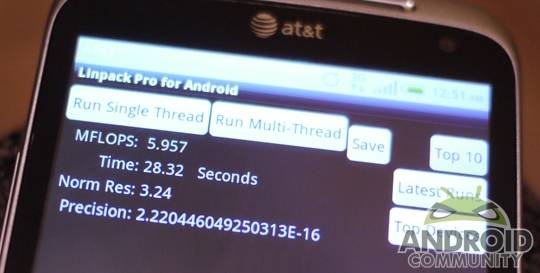 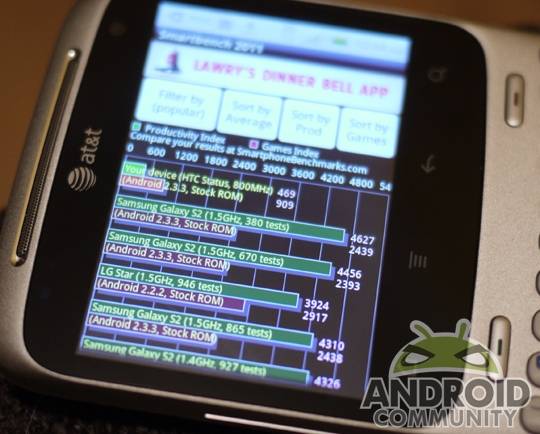 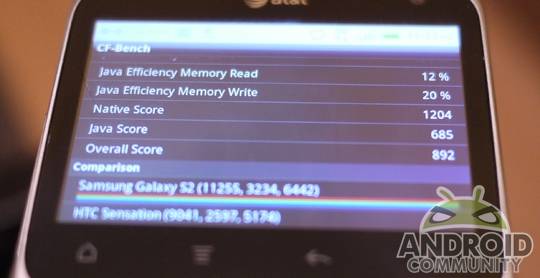 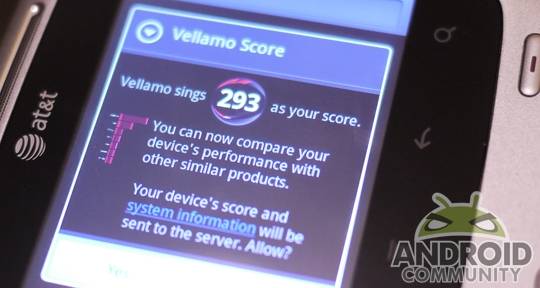 The Facebook button sits below and alone, sitting on the white plastic casing with semi-transparent ink sitting on the “f” so that notifications can shine through with a light that blinks at you like a beacon. A long press always brings you to a screen where you can check in at any number of local locations created in Facebook – or you can create your own. These locations sit on Facebook as a Page where people can then Like, or you can Edit and activate things like a website to tie to the location, categories, etcetera. 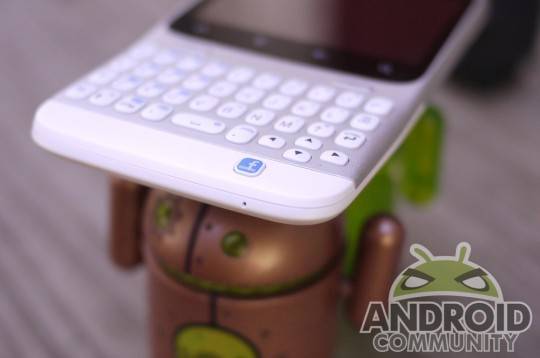 A short press from a home screen, your apps drawer, your Android menu, or a number of other places reveals a screen where you can update your status. This is the same status that you’d update from either your Facebook profile page or Friends Stream otherwise. You have the option here to take a photo and attach it or take a photo from your already-photographed gallery. You can also post directly to one friend’s wall from this screen. 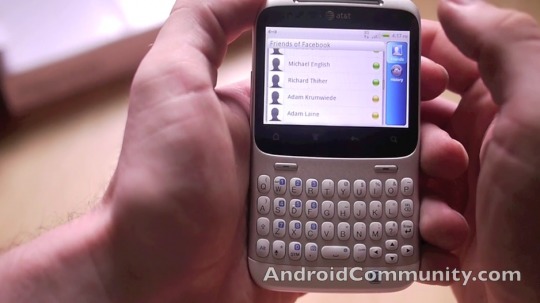 A short press inside any one of your basic media apps will allow you to share that piece of media. This covers photos in your gallery, music you’re listening to with your basic Music app, and webpages you might be browsing. Each of these items will be posted to your wall automatically. What’s frustrating at the moment is that, mostly because the device is brand new we suspect, this functionality does not flow over to any 3rd party apps quite yet. 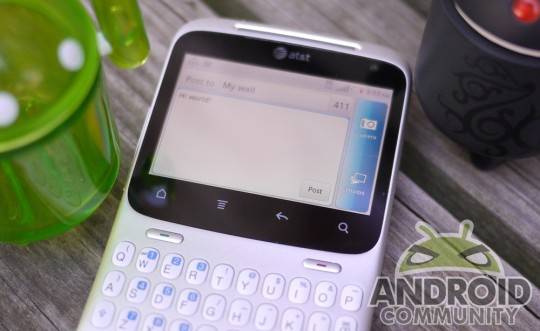 Inside your Facebook app, you’ll notice the same sort of stacking screen arrangement that you’ll remember from your photo gallery. This is HTC’s custom version of Sense made to hopefully make the best use of your relatively small display. In practice though, the better solution would have been to take a cue from the web browser whose URL bar, as per usual, disappears when its not needed. Instead what we’ve got are some rather large buttons and an even smaller screen than we thought we might be dealing with. 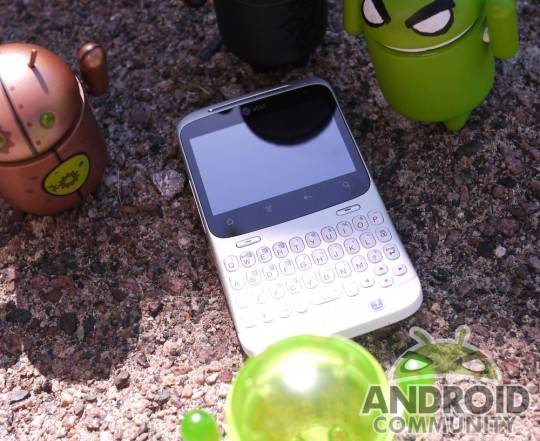 First, the battery lasts a very, very long time. At the very least a day, if not longer – that being relatively long for your average, everyday smartphone. There’s not a whole lot to power in this device, therefor the power just doesn’t run out at the same rate that it does on other devices. Don’t worry about charging the HTC Status up during the day, instead just rely on overnight charges. 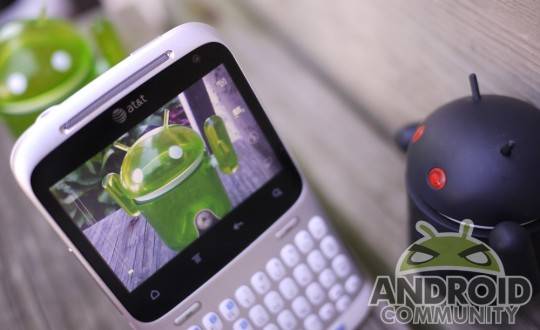 As for photos and videos, trust the examples below, and note that I’d call them Facebook-worthy. They’re not perfect, but for how long a Facebook photo lasts in a person’s mind and how much of a kick you’re going to get out of posting it with the Facebook button, this camera is certainly adequate to say the least. 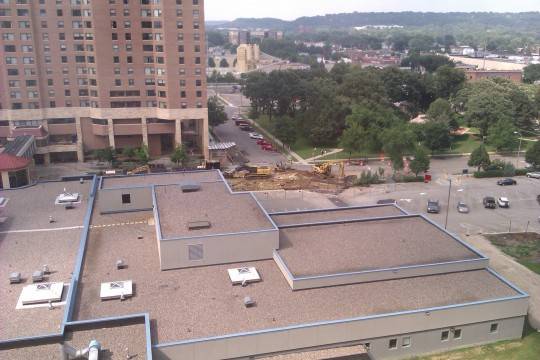 This device is one that feels amazing to use on one hand, but doesn’t have the power and versatility of the rest of the HTC line on the other. There’s a few different people who will very much enjoy this phone, a Facebook addict being one of them. You can just as easily check on your friends and enemies ever 5 minutes on any other smartphone, sure, but with this one, you’ve got the Facebook button! There’s of course other elements that are relatively unique to this phone, one of them being the physical call and hangup buttons below the display, and the whole device feels just about as high quality a build as you’re ever going to see on a smartphone thus far in history, but the Facebook button isn’t quite the game changer I suspect it’s going to be promoted as in stores. 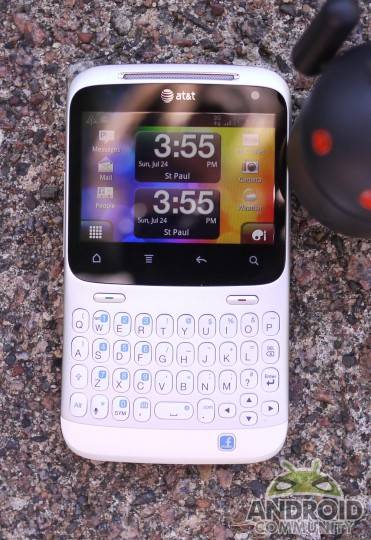 Should you go out and grab this phone? Sure, why not? If you’re a hardcore gamer though, you’ll be immediately sore at the small amount of games you can actually play, keep, or even have working correctly because of the display’s odd setting. If you’re one of those folks who already uses a Samsung Infuse 4G, you’ll feel like you’re looking through a microscope in reverse, but if you’ve only ever used devices not quite classified as smartphones this far into your handheld device life, you’ll feel like you’ve got quite a treat.