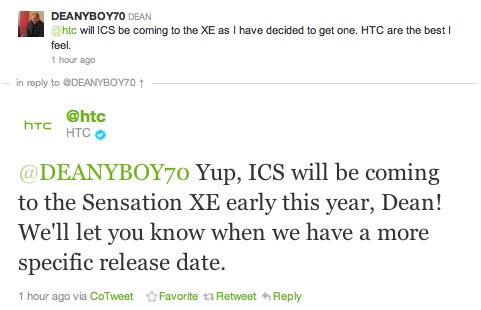 It seems like Android 4.0 (Ice Cream Sandwich) is headed to the Sensation XE soon, as HTC just responded to a recent fan’s tweet. @DEANYBOY70 casually asked, and it’s got to feel great receiving a response straight from the source. We already knew ICS would be coming to the device, but a timeframe was still unclear.

As HTC described, they will let us know when a more concrete date is available. The Sensation XE is available exclusively in the UK/Europe, but the Amaze 4G is the US variant. It’s very likely both updates will happen around the same time.

Other ICS updates for their devices should be on their way too, as they have around 7 other devices they’ve confirmed. It’s important for huge manufacturers like HTC to reach out to their fans as they do. That type of communication is hard to come by, and really shows they’re listening.