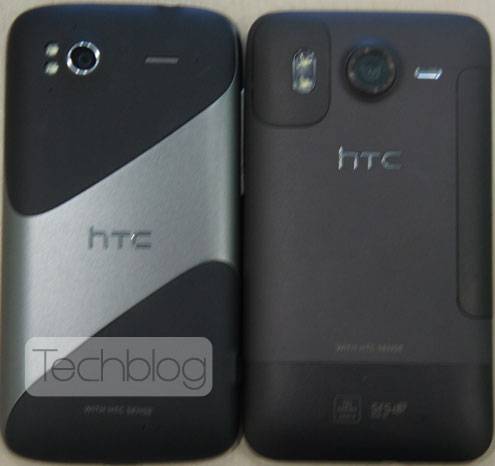 Earlier in the week we had a little leak about a phone we are hearing is the HTC Pyramid, you can read about that here. Whether the image of the Pyramid was a render, or a real image we will let you decide. Today we have something much more convincing that the HTC Pyramid is real, is on it’s way, and looks beautiful. Check out this picture that was just leaked showing it next to its HTC Desire HD sibling.

You can’t tell me that it doesn’t look just like the image in the link we mentioned at the beginning of the story. In case you didn’t check that story out the picture is also below for your viewing pleasure. The render that was leaked earlier shows a beautiful design, with what looks to be a Camera that is finally flush and pretty looking. The picture above shows that same thing and the camera is finally flush with the device. Obviously you can see the Dual-LED flash and speaker grill. That is about all other than the “With HTC Sense” at the bottom as usual.

I don’t know about you guys, but I really like the look of the device. We are still not sure about where it will be going as we first heard T-Mobile back in February, then other reports that the render of the Pyramid might be a phone going to Sprint as the EVO 3D, or the HTC View 4G. Either way it is exciting to see it in a real life photo and we hope to bring you more soon. Stay Tuned!