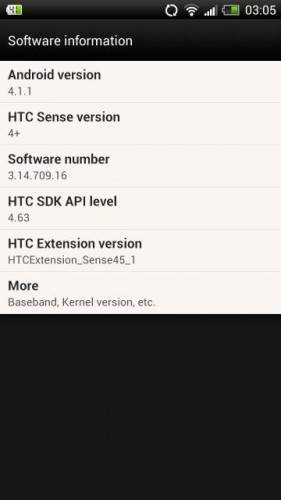 Back in October the folks from HTC stated that we’d be seeing Android 4.1 Jelly Bean arrive for their flagship HTC One X and even the One S near the end of October. It looks like that only happened for a few One X owners in select regions, and the One S wasn’t so lucky. This week however the One X Android 4.1 Jelly Bean update is rolling out globally.

We’re hearing from multiple different sources that the update is in fact landing as we speak for the international Tegra 3 powered HTC One X. Regions such as India, Argentina, UK, Russia, Dominican Republic, Peru, Brazil and more have all started seeing the OTA. As usual it should arrive soon, or you can check manually if you’d like.

The update to Android 4.1 Jelly Bean brings all the improvements such as project butter for a smoother UI and overall system, Google Now, expandable notifications and much more from Google. Then on the HTC side you’ll be greeted with the newest Sense 4+ where they’ve improved their camera, made the gallery more usable and pretty, as well as a few other changes.

While the update isn’t too big in terms of overall look and Sense UI, the behind the scenes changes should make for a faster, smoother experience device wide. Feel free to head to settings > software updates > and check for updates as we speak. The update to 4.1 JB is around 364.54MB in size so could take a few minutes to complete. Now we just have to wait for AT&T to push out the same. We’ve seen a few leaks, but official updates are usually the best route. Stay tuned for more details.