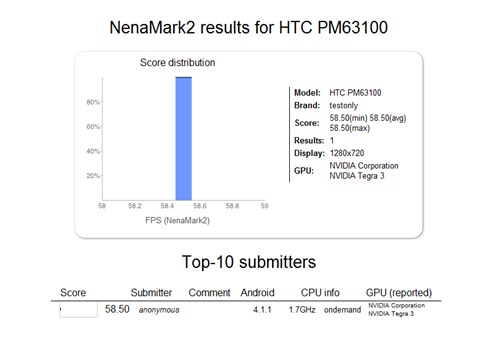 HTC and T-Mobile appear to be teaming up to offer that impressive 4.7-inch HTC One X to their customers. After launching internationally with a quad-core Tegra 3, then on AT&T with a dual-core Snapdragon S4 processor and 4G LTE, T-Mobile will now be getting their own quad-core flavor according to some newly leaked details and benchmarks.

First rumored as the HTC Era 42+, it now looks like this will indeed be called the HTC One X+ and arrive for T-Mobile sometime this fall. Today the folks from TmoNews have uncovered a new benchmark test that confirms the fact that it is running Android 4.1.1 Jelly Bean, as well as a boosted and improved quad core processor.

Running the quad-core NVIDIA Tegra 3 processor at 1.7 GHz, sporting Jelly Bean, and then that 1280 x 720p screen size. We can’t technically confirm this is headed to T-Mobile but all the previous leaks lead to that conclusion.

According to a few other reports (linked to below) the possibility of a beefed up 1.7 GHz HTC One X+ could also be making its way to AT&T too, but that would just be weird. I can’t see them releasing a competing device to their current flagship on the carrier already, but we’ve seen stranger things. We are hopeful to see this phone arrive sometime in September and will update when we hear more.