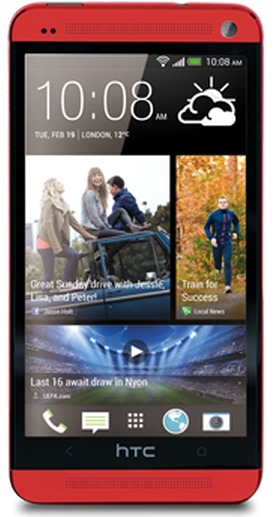 Yesterday after all the waiting and teaser clips the folks from HTC finally unveiled and showed the world their new flagship smartphone. The HTC One looks pretty impressive but their event only had two color options available. Silver and black. Now it appears that a at least one other color will be offered, even though it doesn’t appear to be coming to the US anytime soon.

The HTC One will also be coming in at least one other color. That being a bright and pretty Red edition. We aren’t sure if this will be a certain carrier exclusive, or only available in select regions as a limited edition but the Red One was spotted on HTC’s website. The image above came right from HTC themselves, although reports now confirm it has been removed from the US page.

However, the red edition is still listed on HTC’s global website, and simply was removed from the US page only. At first I was hoping this could be the rumored DLXPLUS for Verizon, but that’s extremely doubtful. The HTC One will be landing on most US carriers (except Verizon) as well as almost all carriers internationally. HTC’s going big with the One — and it looks to be their best smartphone yet.

Do you guys like the red option? I think it’s pretty snazzy myself. HTC has a few different colors with their new Windows Phone 8 devices, so we could see the same array land for their Android lineup eventually. For now we’re still waiting exact details from carriers, but stay tuned as we’ll report back once we know more. Catch everything you missed regarding the HTC One from the timeline below.