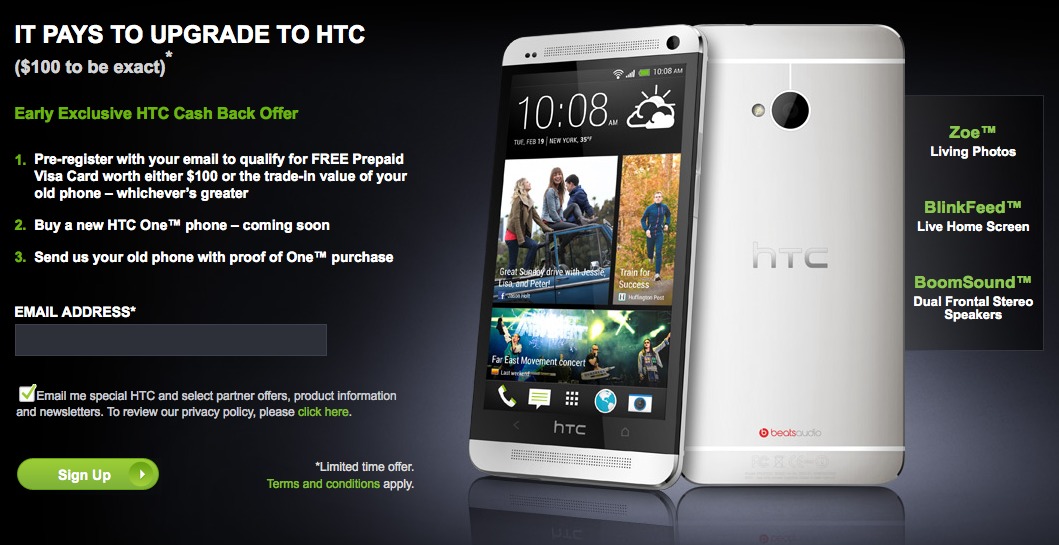 HTC is aiming to make the new One smartphone their most impressive launch ever. It will be available in mid March on multiple US and global carriers all around the same time, has top-tier specs that almost no other phone (for now) can touch, and now they’ve announced a new HTC One trade-up program. Yup, they’ll give you $100 back when you trade in your old phone and buy the new HTC One.

It’s simple really, the HTC One is their best smartphone to date. Today they said it’s not the best phone on the market currently, instead going big and claiming it’s the “best smartphone ever created” in general. They want to prove that by giving those who trade in their old and outdated device for the new One $100 cash-back.

Basically if you send them your old and aging smartphone, no matter what it is, they’ll give you up to $100 back once you prove you’ve purchased the new HTC One. We don’t have the details regarding what devices will earn you a certain dollar, but most likely anything fairly recent will earn that $100 VISA card direct from HTC. It’s that easy.

Send them a proof of purchase once you’ve received the impressive and beautiful new HTC One along with your old device, and then HTC will send you back up to $100 to spend as you choose. For those interested in the trade-in program, or the One in general you’ll want to start by clicking here. Stay tuned for our live hands-on pictures and video coming soon!