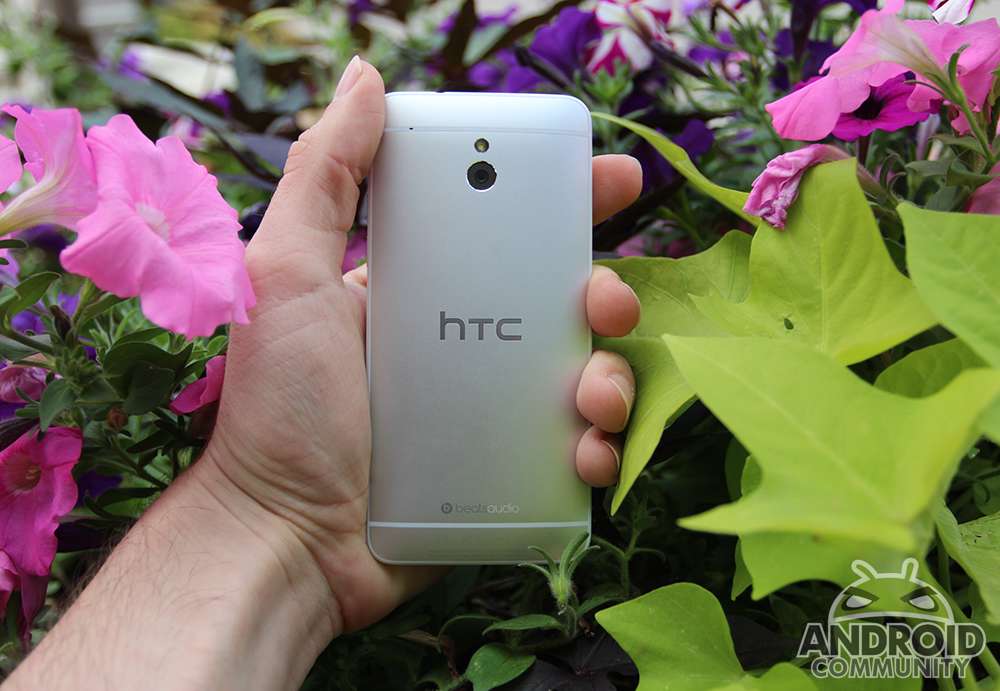 Following up the success of the original, HTC launched a new and slightly smaller HTC One mini last month, with everything we loved about the first model in a smaller package. Well, almost everything. Many of the specs received a slight drop, but all the important aspects remain. Can this mini-me smartphone win us over and fit nicely in the palm of our hand? Read on for our thoughts on this stunning little device.

What’s not to like? It has a beautiful display, although not the same high resolution as the original. There’s a well designed aluminum frame wrapping the device, and we have Android 4.2.2 Jelly Bean. We’ll rundown everything we did and didn’t like about this new smartphone, and share plenty of pretty pictures along the way.

This is truly an HTC One mini in every sense of the word mini. It looks nearly identical in every single aspect, aside from a slight wrap-around of the plastic edges to the front fascia. Unlike the 4.7-inch 1920 x 1080p original, the mini will have you working with a 4.3-inch 720p HD display. So it’s instantly better than the qHD non-HD display in the Galaxy S4 Mini. 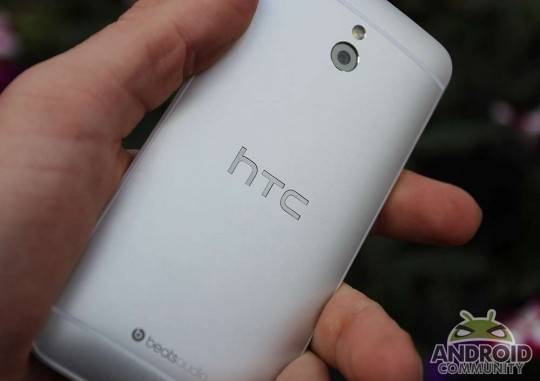 The One mini comes in at 132 x 63.2 x 9.25 mm and 122g, so it’s just slightly smaller than the original, and not quite as heavy. As far as the hardware goes we have a 4.3-inch 720p HD IPS display, and we still have everything else like the aluminum design, UltraPixel camera, and the Beats Audio integration.

The mini is essentially a watered-down smartphone and rocks a 1.4 GHz dual-core Snapdragon 400 processor and 1GB of RAM (vs quad and 2GB) on the original. Then we have 16GB of storage and no micro-SD for adding more. The snapdragon has been plenty quick, although the battery life isn’t quite HTC One levels. The mini also has no OIS (optical image stabilization) on the 4MP Ultrapixel camera, no NFC, and no IR blaster built into the power button. So those are a few of the drawbacks. Not to worry though, we still have the amazing front facing speakers, precision drilled holes, and even the notification LED in the speaker on the top left. Here’s the hardware:

We loved the original HTC One hardware, and here we are left feeling the same. HTC has done an excellent job building a top-tier quality handset, that is made to last. Everything about it is fine-tuned, stunning, crisp, and just feels nice. You will notice the front has a ring of plastic around it extending over the sides. Similar to the original, only it wraps onto the front of the device. At first we weren’t fans, but overall it makes holding it, no matter what way the screen is facing, extremely comfortable. It should also help protect the aluminum and that display from drops and cracks. 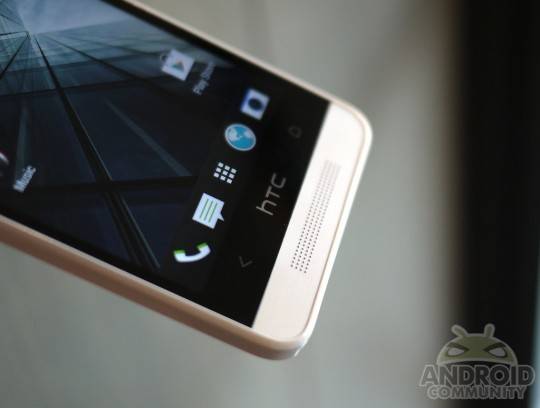 In the end the hardware is excellent. While the Galaxy S4 seems like an afterthought and pales in comparison to the original S4, the HTC One mini comes in as a nice offering, and more of an additional option, rather than just attempting to cater to the budget crowd. It might not be quite as solid feeling in the hand as the original, but it still comes in as one of the best in the business.

Where to begin. If you’ve used an HTC Sense UI device in the past, you know exactly what you’ll be getting here. If you’ve seen or played with the new Sense on the HTC One, it’s the exact same experience through and through. HTC added a new Blinkfeed news and social aggregate widget front and center, which we love, and then the camera Zoe features are nice as well, but more on that in the camera section.

Running on Android 4.2.2 Jelly Bean you’ll have a fast, clean, stable, and buttery smooth experience here. Of course HTC Sense UI covers it all up with their own touches, some good and some bad, but that’s expected. We’re rocking the international model here, but likely the AT&T flavor (that’s leaked several times) will have all their usual bloatware. Here though, things are rather mild.

Sense UI brings a new 3 across system for the app tray, which for those with tons of apps could become quite irritating scrolling forever. However a quick tap of the 3 dots (menu button) while in the app drawer will let you customize it back how we’re used to, which will also save time and let you scroll less to find what you need. Or just use folders. We love folders. In the end the Snapdragon dual-core handles Android 4.2 with ease, and 4.3 should be even better when it arrives. For more details on Sense UI specifically hit the HTC One review linked to above, or at the timeline below. Here’s a quick video.

The dual-core Snapdragon 400 here is certainly a step up from other mini devices or low-end MediaTek powered phones, but it’s obviously geared for a more budget-conscious crowd. HTC opted for Snapdragon here, as usual, and everything has been finely tuned and works rather well. The results in benchmarks weren’t all that great, but then as usual, that’s only a small part of the story. 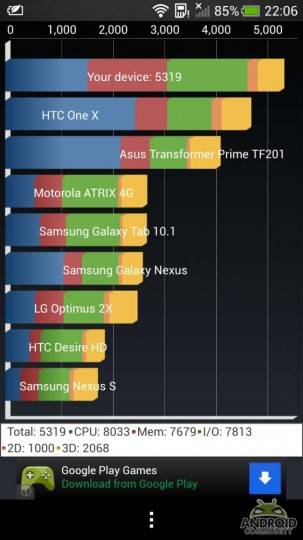 As you saw from the video above, there’s no slowdown with day to day usage, and the dual-core kept things running rather well. We’d love to get 2GB of RAM and a top-tier CPU in a device this small, but it seems most Android manufacturers save that for their flagship massive screen phones. In general though, the performance in this small package was nice, welcomed, and something we’d like to see more of.

Of course we’re working with HTCs “Ultrapixel” camera gamble here, but so far we’re loving it. The mini loses the OIS feature, but the low-light performance still was above average from our tests, as was video. With amazing photos, 1080p video, and HTC Zoe you’ll have plenty of content to shoot and share within minutes. 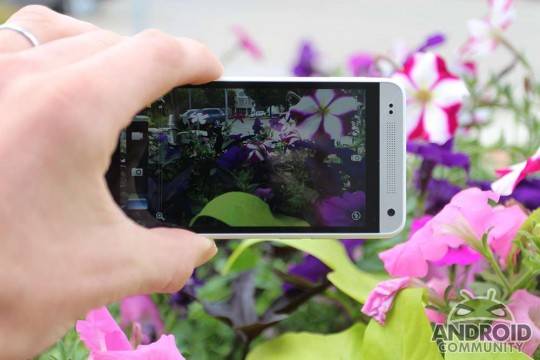 This device has the same f/2.0 aperture in play as well as the same dedicated ImageChip 2 image processor to keep processing, images, and video looking good, and the Snapdragon 400 does just fine too. Photos come out clear and crisp, video you can see below, and again this is as good as the original. Which was above average to begin with. Here’s some photo and video samples:

Of course coming in a smaller package meant they’d have to sacrifice something somewhere. Aside from losing the quad-core processor, NFC, and the IR blaster, we also received a smaller battery. Paired with a measly 1,800 mAh battery we were seriously worried, but in the end things were ok. Big tasks churned through it quite fast, such as gaming, but average daily usage was great. 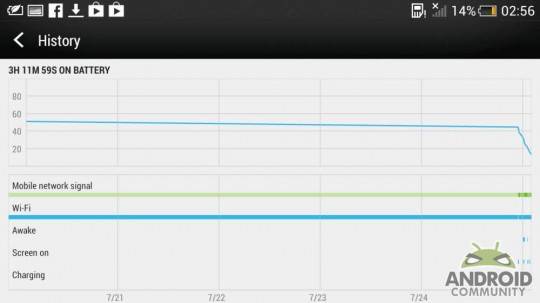 Paired with the efficient Snapdragon 400 CPU when the screen is off the phone sits nearly idle sucking no power. So while you’re at work it won’t die doing nothing. Constant usage is another story, but average off and on usage should get well past 15 hours and get you through an entire day. We see absolutely no reason they couldn’t have provided us with at least a 2,100 mAh battery, and hopefully one day HTC will start beefing up in this area.

We like it! We’ll just get right to it here. The HTC One mini follows along with everything we absolutely loved in the original. Only in a smaller mini-me and slightly watered down package. Now if HTC would just hurry and drop this on AT&T with 4G LTE, and possibly surprise us by dropping both the One and the mini on Verizon this month, then we’d be happy. And we’re betting their Q3 report would be too. 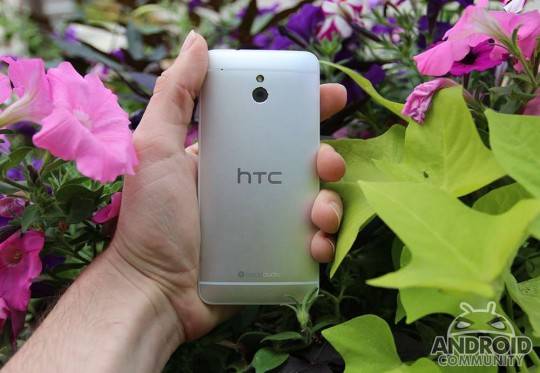 In the end you trade off a 1080p HD display, quad-core power, and a few bonus (but not necessary) features like the IR port all for a smaller package and lower price point. For those who need or want the biggest, best, and fastest, this isn’t for you. The rest of the world however, will absolutely love everything about the One mini, just as we have.

Now if HTC would just give us a micro-SD slot and a bigger battery, then we’d be 100% sold. In the meantime however, this phone will make plenty of users happy and hopefully it hits the US sooner rather than later.