Some new images of the HTC One Mini have recently surfaced. These latest images are showing the handset in black and thankfully they are not blurry. While we are of course going to treat these as nothing more than leaked images, we should point out the original source has since taken the images down. There is probably some speculation that could go along with that, but we will leave that as it stands.

Anyway, the images were originally posted by the smartnews.bg blog. There are three pictures and they came along with a few details and specs of the handset. The specs should sound familiar to those who have been following the saga of the HTC One Mini (M4), however it is nice to see them coming from the person responsible for shooting these pictures. 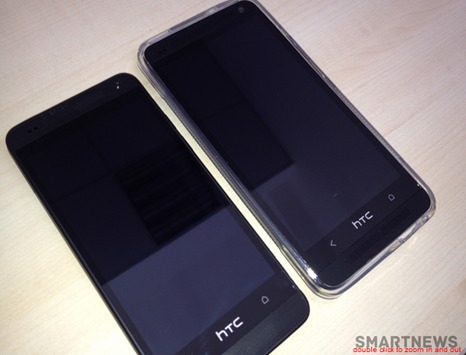 That said, The HTC One Mini specs break down as follows; 4.3-inch 720 display (with a 342ppi), 2GB of RAM, 16GB of internal storage space and an UltraPixel camera. The handset is said to be running Android 4.2.2 Jelly Bean and as you can see in the images — it looks to have the front-facing stereo speakers of the HTC One.

The latest rumors and reports are suggesting HTC will unveil the One Mini sometime during the third quarter of the year. In addition to these images, these were also some leaked docs coming out of O2 Germany that mentioned the handset. Those same docs also included a mention of the HTC One Max.

These O2 docs didn’t include much new and really just touched on a bit about how the handsets were heading to the carriers available device lineup. There was mention the One Mini will be available in silver and black. Finally, the HTC One Max rumors point towards a device with a 5.9-inch Full HD display, Snapdragon 800 processor and UltraPixel camera.