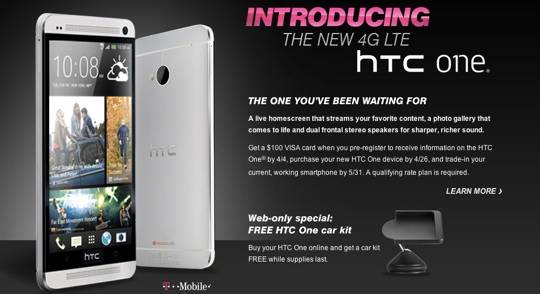 The last we heard on the HTC One was that it is expected to arrive for sale in the US before the end of April. And well, despite still having a few weeks of waiting, it looks like the carriers and retailers have begun announcing some deals. Or more specifically in the case of the HTC One, some extra incentives. Up today we have information of extras coming for those who purchase the One with T-Mobile or with Radio Shack.

Up first is the T-Mobile offer. Those who purchase the One smartphone with T-Mobile will get a free car dock. T-Mobile notes this as a web-only offer and is also quick to mention the offer is available “while supplies last.” In addition to the car dock, the T-Mobile offer is also sharing in with the $100 offer from HTC. This portion does involve a time cut-off though.

Potential buyers looking to take advantage of the $100 will need to register before April 4, purchase the HTC One before April 26 and then trade in your current (working) smartphone before May 31. I guess this also offers a nice hint as to the availability timeframe for the HTC One (at least with T-Mobile).

T-Mobile offer aside, Radio Shack has an incentive of their own. The Radio Shack offer is good for those purchasing an HTC One with the Now Network. It is also an offer we have seen from Radio Shack in the past. Basically, those who move forward with this offer can expect to pay $199.99 for the HTC One (on a two-year agreement) and get a $10 Radio Shack coupon along with a $50 Google Play Store credit.