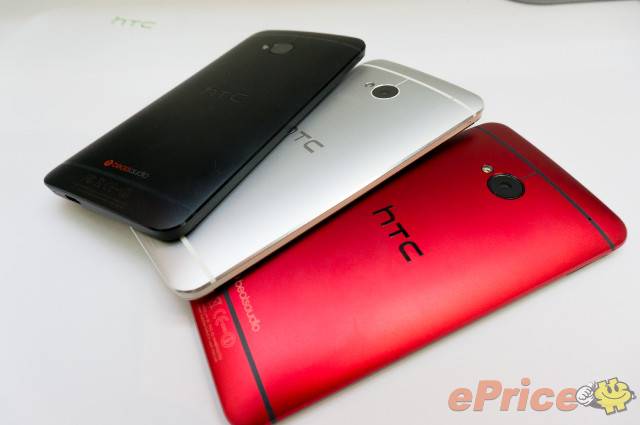 After a few months of waiting, last month the folks from HTC finally announced the Glamour Red HTC One would be hitting shelves and available to all. It was first spotted online the day they announced the HTC One, but it was never heard from again. Now however, those in the UK can get this impressive aluminum wrapped flagship smartphone in a brilliant red color variation. Check it out below.

We’ve seen a few mock-up pictures as well as the press render, but what we have today is actual photos of the HTC One in Red, thanks to ePrice, who is showing us the beautiful new color. The device, as expected, is available starting today from Phones 4U and a few others.

The device is being offered on contract to carriers like EE, Orange, Vodafone, and T-Mobile, and as you can see from the images provided – it looks pretty sharp with the new color. So far we haven’t heard if this device will make it elsewhere, but I’m hoping Verizon somehow manages to offer the red version at release too. Which is rumored for early August.

As you expected, this is the same phone we’ve already reviewed and absolutely love. You’ll enjoy a 4.7-inch 1080p full HD display, Android Jelly Bean, Sense UI 5 with Blinkfeed news features, Zoe, and that quality Ultrapixel camera on board. Then of course it’s all powered by Qualcomm’s quad-core Snapdragon 600 processor and 2GB of RAM. So yes, it’s the same phone, only that aluminum frame is now bright Glamour Red. Who’s interested?