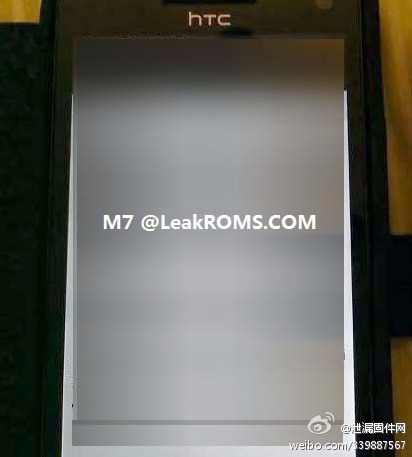 Now that all the CES news is starting to wind down we have some juicy pictures and details that were just revealed about HTC’s upcoming flagship Android smartphone. We’ve mentioned the HTC M7 before, but today we are getting what could be our first look at the handset along with leaked HTC Sense UI 5.0 screenshots. Check it out below.

While this is our first actual image of what could be the HTC M7, the photo surely doesn’t show us very much of the actual smartphone. From what we’re seeing HTC will be bringing their impressive polycarbonate design and new smartphone approach from Windows Phone 8 over to Android. I love the thought of it, just check out the HTC 8X Review from SlashGear for an idea of hardware. Below is also multiple HTC Sense UI 5.0 screenshots that have also leaked, but we have bad news.

The M7 is reportedly going to arrive with Android 4.1 or 4.2 Jelly Bean, and many sources claimed HTC would be going with on-screen navigation buttons and removing those pesky capacitive buttons of old. Sadly we’re still seeing that eye-sore better known as the legacy menu button in these screenshots. That means just like the HTC One series we’ll have 3 capacitive touch buttons, and a dedicated on-screen menu button when needed. Sadness.

From what we’re seeing the rumors suggesting a cleaner and leaner HTC Sense UI were accurate, but still looks just like Sense. We were hoping for a closer to stock Android look but that won’t be happening any time soon. Either way I’m more excited about this 4.7-inch 1080p quad-core smartphone after seeing a few screenshots. Hopefully images of the full smartphone leak soon — but expect it to look similar to HTC’s Windows Phone offerings.