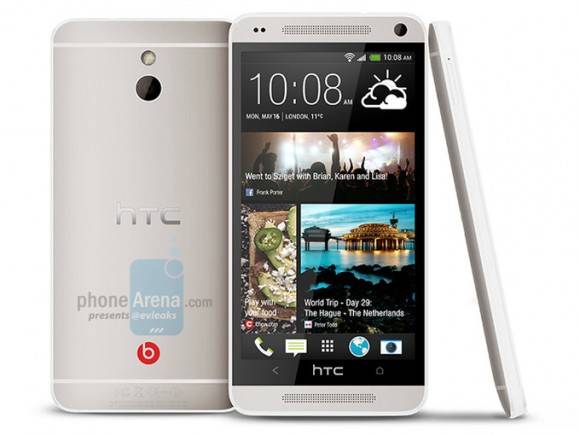 We have seen previous leaks and rumors surrounding the HTC M4, however as of today we are seeing details that seem to have shifted from what we last heard. Earlier in the month the M4 rumors were pointing to a handset that would be similar to that of the HTC First. Basically, it was looking like the M4 would launch with specs similar to the First, but the rumor also suggested the handset would have a build quality closer to that of the First as opposed to the One.

Well, flash forward till today and it looks like some new details have hit the web. Basically, it is now looking like the HTC M4 will debut as a smaller version of the HTC One. That is to say the build quality will be the same but the specs will be lower. This seems to imply the HTC M4 would be the device for the person who loves, but cannot afford the One.

The latest spec related chatter for the HTC M4 has the handset sitting with a 4.3-inch 720p display, dual-core processor, 2GB of RAM, 16GB of internal storage and an UltraPixel camera. For comparison sake, the HTC One has a 1080p display with a quad-core processor and 32GB (or 64GB) of internal storage space. The M4 is also expected to arrive with a 1700 mAh battery, which surprisingly is lower than the HTC One and First.

Otherwise, as one would hope to see, the HTC M4 should be launching with Android 4.2 Jelly Bean. With that, while we obviously still need an official confirmation from HTC, the M4 is now expected to be arriving near the end of the second quarter. Of course, that coincides with an earlier report which had the M4 shipping sometime in June.