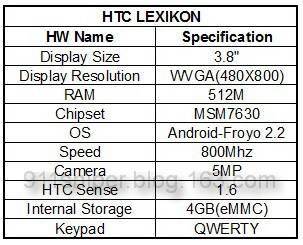 Details of two new HTC Android smartphones have emerged, seemingly dug out of the company’s own ROMs by 911HTC.  According to the site, the HTC Bee and HTC Lexikon each run Android 2.2 Froyo, with the Bee packing a lowly 528MHz MSM7625 chipset while the Lexikon gets a somewhat more satisfying 800MHz MSM7630.

Both have a 5-megapixel autofocus camera, but the Bee has a 3.2-inch QVGA display while the Lexikon gets a larger 3.8-inch WVGA panel; both run HTC Sense.  The Lexikon also packs a QWERTY keyboard, which suggests it might be another version of the HTC Vision (though the vision has a 3.7-inch display).

According to 911HTC, the HTC Bee is a CDMA device for Verizon (as well as Cellular/UTSTARCOM/Alltel/CellSouth); no word on who might be offering the Lexikon. 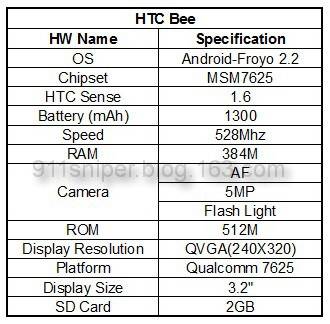