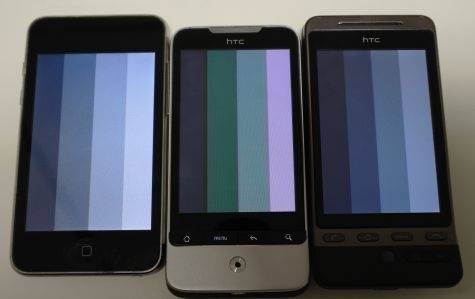 The AMOLED display used by HTC for their Legend smartphone has ended up under the microscope this week, with Tweakers enlisting the help of color-testing equipment after the handset was criticised for not displaying grayscale colors properly.  According to their results, the Legend’s screen shows various degrees of pink, grey, brown and green rather than true grayscale.

At this stage, Tweakers aren’t conclusive on whether the issue lies with the AMOLED display itself, or its white balance settings.  However, the effect – in varying degrees – was observed in two Legend handsets they tested.  Meanwhile brightness was also down, with the Legend mustering 253 cd/m2 while its Hero predecessor – which uses an LCD display – managed 310 cd/m2.  Unfortunately an HTC Desire wasn’t available for Tweakers to similarly examine.