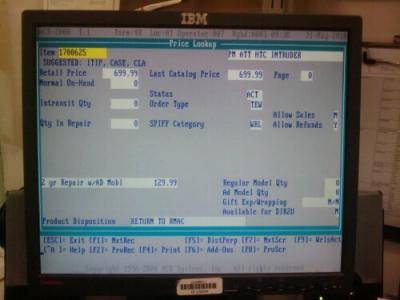 First it was the Aria then the Liberty now the Intruder could be making its way to AT&T.  Are these 3 HTC devices the same? Nobody knows at this point, AT&T could be on an all out Android assault now that they are done with the iPhone presentation.

There is currently now image of this device, there’s only a screenshot of the device in AT&T’s inventory. The latest rumor says this will be another Android 2.1 handset and the screenshot is taken from a Radio Shack.

The off contract price of this device is $699 while you can have it for $129 on contract. That’s a huge swing in pricing and it gives a few hints on what type of device it may be. If it’s worth $699 off contract than it could pack in some really impressive specs and be a high-end device. But the on contract price points to a low-end or midrange device. This is quite odd, HTC does make a few WinMo devices so this could be a new Windows Phone 7 device.