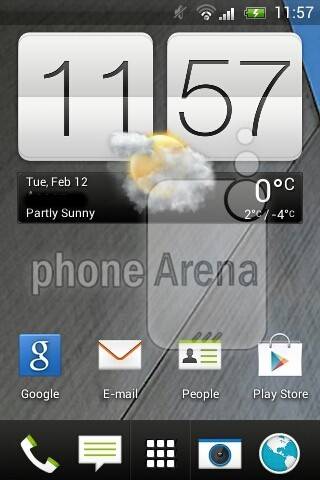 While the past few weeks all the attention has been on HTC‘s upcoming M7 flagship smartphone, the company actually has a few more in the works for early 2013. Reports have somewhat confirmed HTC will be launching the M7, an M4, as well as a device codenamed the G2. Now this isn’t the first time we’ve heard G2, but that’s just a code name. More details can be found below.

Earlier this month we reported that they’d also be revealing an M4 and G2 at Mobile World Congress this year, and we only have a few more weeks before we actually find out. Then last week images surfaced of what many are calling the HTC M4, so these new screenshots today could technically be their upcoming entry level G2 smartphone.

The M7 will be known as the HTC One, so we’re pretty confused on what they plan to call these other two. According to a few tipsters the image above is HTC Sense UI 5.0 running Android 4.1 Jelly Bean on a new 3.5-inch smartphone from HTC. Which fits nicely into the specs for both the M4 and the G2 — if those reports are accurate.

Specs include a 3.5-inch WVGA display, a 1.0 GHz single-core processor with only 512MB of RAM, and 4GB of storage. Basically as low end, bottom of the barrel as it gets. This should be HTC’s new budget smartphone to replace the aging HTC One V, but nothing has been confirmed. The image above is slightly different from past HTC Sense 5.0 leaks, and that could be due to it being a paired-down and lighter version for the budget friendly phone. We’ll report back once we hear more details. I’m sure many would be interested in a budget friendly Android 4.1 Jelly Bean phone from HTC.