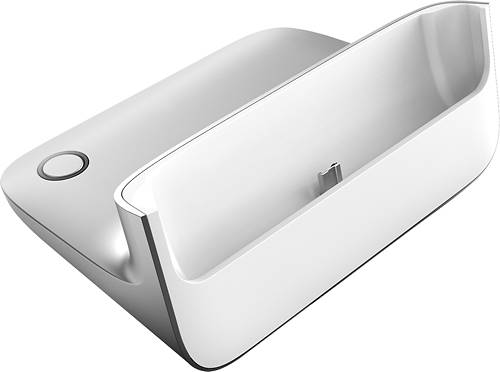 The official HTC Flyer Desktop Dock has shown up for pre-order at Best Buy, with availability expected in 1-2 weeks. Supporting the 7-inch Flyer in portrait orientation, the dock errs on the simple side when it comes to connectivity.

On the back there’s apparently a single USB connector that will work with either an AC adapter to charge the Flyer, a USB sync cable to hook it up to your PC or Mac, or an MHL HDMI adapter to output the tablet’s display to a TV or projector. Unfortunately you don’t get a native HDMI port, which seems something of a missed opportunity, and there’s no mention of even a 3.5mm audio output for using the dock as a media player station.

In fact, your $49.99 basically gets you a more straightforward way to prop up your Flyer and recharge it, and HTC doesn’t even include a USB cable or AC adapter from the sound of things. The seemingly illuminated button ring on the back is something of a mystery, but we’re guessing it’s a charge indicator.