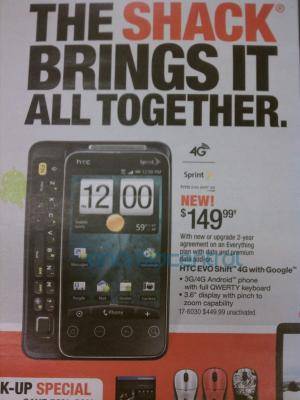 Not really a surprise here. Word had it that the HTC EVO Shift 4G, the smaller cousin of the original EVO 4G with a physical keyboard, would be landing in stores on January 9th, and now according to a RadioShack flier, that can be pretty much assumed to be true. As for the pricing? We already knew it was going to be $150, too.

Of course, things could change. However, considering the smaller stature, even with the addition of the physical keyboard, the $150 price tag is probably a good spot for HTC and Sprint to aim this device. We’ll have to wait a bit longer for HTC to officially unveil the device, but with the 9th creeping up on us, we probably don’t have to wait that much longer. Anyone actually interested in picking this device up?