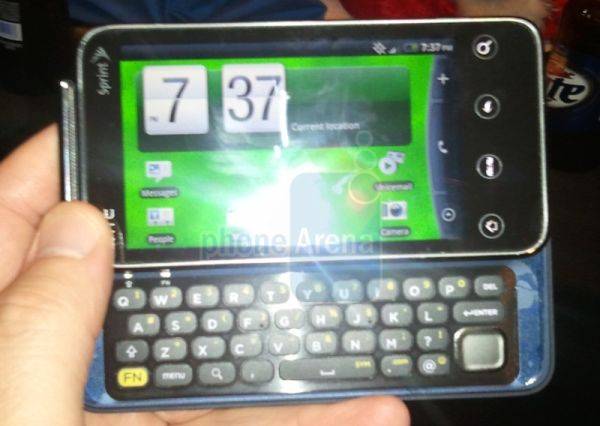 So far, the HTC EVO Shift 4G has been seen only in canned images. While the device itself isn’t official, from either Sprint or HTC, by now we’re just counting down the days until either company does make the device in question, a smaller variation of the original HTC EVO 4G, the real deal. In this photo, we see that the device does indeed have a smaller form factor than its predecessor, along with a unmistakable chrome bezel.

Luckily enough, this picture, which was sent to PhoneArena from an anonymous tipster, shows the phone without that protective cover we’ve been getting used to seeing. According to the tipster, the device will feature an 800MHz processor under the hood, much like we saw released with the T-Mobile G2 earlier. The main difference, as we can see in the picture above, is that the EVO Shift 4G is covered in Sense UI, while the G2 isn’t.

As far as the keyboard goes, it doesn’t look much different than what we saw in the previous leak, even if we were wondering about the legitimacy of the image. We’ve still got that strange looking control pad on the bottom-right, and and an overall look and feel that reminds us more of a toy, rather than a smartphone. But now that we’ve seen the device, out in the wild, it should be any day now that Sprint comes clean on the whole thing, right?