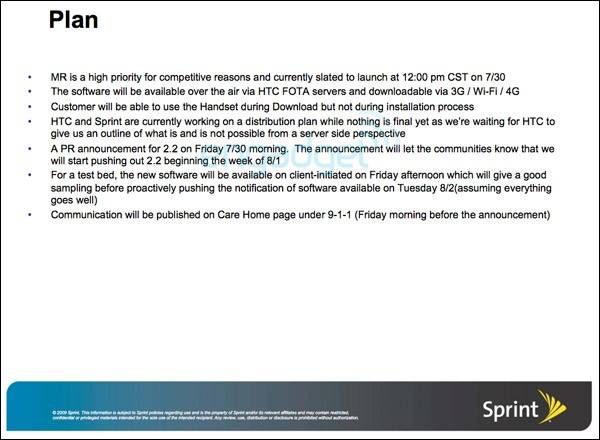 That came out of nowhere. But, thanks to a new leak from an internal Sprint screen, it looks like the HTC EVO 4G is getting ready to get updated to Android 2.2 — starting tomorrow. That’s right, July 30th. But, in classic Sprint fashion, the update isn’t going to just bring the EVO 4G to the most current software version, but it’s also going to include a plethora of new updates to the device itself, courtesy of Sprint.

For example, you’ll be getting a host of new widgets (admittedly, that’s more from HTC than Sprint), and you’ll also be able to use a flashlight application to make use of that LED flash on the back of the device. You will also be able to use “light-assisted” features to help you take 720p HD video. There’s also improvements to the overall video capture as well. But, a bit of bad news, too. That mobile hot spot hack that made the rounds on some EVOs after its launch? Yeah, Sprint’s probably going to patch that up with this update, so if you’re partial to it, you may want to evaluate your situation.

The OTA update is supposed to start tomorrow, but obviously it won’t get pushed to all the handsets out there at once. You should expect it to be rolled out in waves, and it will probably take until the end of the first week of August before it finishes up. That’s if the update actually starts rolling out tomorrow. We’ll be looking forward to some images from you EVO owners out there, if you get the update.

[Update]Well, it looks like Sprint wanted to come forward and clear the air. And, guess what? It’s great news. HTC EVO owners should start getting notifications that their favorite Android handset is able to get upgraded to Android 2.2, beginning August 3rd. Again, this is an OTA update, so it should be staggered, so if you don’t get the update right when you wake up, don’t freak out. It’s coming. Check out the full press release below.

Android 2.2 offers HTC EVO 4G feature enhancements including Bluetooth® voice dialing, built-in Flash, the ability to store apps to the memory card and much, much more

The award-winning HTC EVO 4G just got that much better. We are excited to announce that beginning the week of Aug. 1; Sprint will begin rolling out the Android 2.2 upgrade to its HTC EVO 4G customers.

Sprint will be the first wireless carrier to bring1 the latest version of Android to its customers. The Android 2.2 software release provides a significant number of feature enhancements, including:
• Voice Dialing Over Bluetooth.
• Application Storage on External Memory, giving users more storage room for all their apps.
• Camera 4-way rotation allows the camera icons to rotate with the camera.
• Improved Browser Performance including a faster JavaScript engine and Flash 10x Support improving the user’s ability to view videos and available content associated with web pages.

“Sprint is thrilled with our customers’ response to HTC EVO 4G and the innovative and exciting experience it offers,” said Fared Adib, vice president – Product Development for Sprint. “It is exciting for us to lead the industry in bringing the Android 2.2 update to these customers and improve on the amazing experience they receive with America’s first 4G capable phone.”

Easy Downloading
Sprint will begin sending update notifications to users in waves beginning Tuesday, Aug. 3 and the upgrade should be available for all HTC EVO 4G users by the middle of August.

The notification will let the users know that the update is available and it will provide the simple two-step over-the-air download process.

1. Users will receive a notification that Android 2.2 is available for download.
2. Once the user has downloaded the update, they will be prompted to install the update. The user will be notified that their device will be disabled during the installation process. The phone will be ready to use once the process completes.

For those who just can’t wait to get Android 2.2, there will be an easy user initiated option to download the upgrade. Customers can access the software update through their HTC EVO 4G under the Settings Menu System Updates HTC Software Update. This will initiate the three-step process also.

Rave Reviews and Accolades for EVO
Check out what the top tech reviewers are saying about the device.
Walt Mossberg with the Wall Street Journal (sub. req.) says:

“The HTC EVO 4G, when used on Sprint’s 4G network, offers the highest consistent downstream data speeds I have ever seen on a cellular network. It also has a number of other strong features: a front-facing camera for video chatting, and the ability to serve as a Wi-Fi hotspot (for an extra fee of $30 a month) that can simultaneously connect up to eight laptops or other devices to the Internet.”

“Let us be crystal clear: we love this phone. Nay, we adore it. …truly one of the best smartphones ever made…”

“…if you live online, the EVO offers a big, beautiful, and powerful window to the world.”

“The EVO starts with a world-class 3G smartphone and adds 4G as a “turbo boost” option. If you’re an intensive Web user, you’ll like it even without 4G.”

“Overall, the HTC Evo 4G is, hands-down, the best smartphone that Sprint has to offer and certainly ranks as one of the best Android phones on the market today.”

“HTC’s Evo 4G phone is fast, powerful and fun to use – as long as your heart isn’t set on tapping into the speedier new network it was designed for.”

“Even if 4G hasn’t yet reached your neck of the woods, the Evo 4G is a killer device thanks to its zippy processor, huge display, and an interface that makes Android more intuitive and user-friendly. While the keyboard could be better and the battery life longer, the Evo 4G richly deserves our Editors’ Choice award. It’s a no-brainer for Sprint customers, and a tempting choice for those on other carriers.”

“It’s actually staggering how different the experience is of using a phone that has over 4 inches of display, diagonally, versus more conventional screens, which run closer to 3.5 inches. Even when you’re using the same OS at the same resolution-in this case, Android 2.1 with HTC’s Sense UI at 800×480, seen on their last few Android phones.

It’s kind of like when the jeans you’ve been wearing forever start to fit a little too snugly because you’ve been eating a little too well, and you finally cave and buy a bigger pair of jeans, there’s a mindblowing moment when you close the button for the first time of how much freedom you suddenly have to breathe. So you kind of hyperventilate.”

CNET, LAPTOP Magazine and eWeek gave HTC EVO 4G awards for Best of Show when it was announced at CTIA this spring. It was also recently cited on MobileTechReview’s Best Smartphones and Best Touch Screen Phones lists.

Customer favorites on HTC EVO 4G’s long list of features include the 4.3-inch screen, dual 8MP video camera capable of capturing HD quality and front-facing 1.3MP camera. They also appreciate the HDMI output jack making it simple to start a movie for your children in the backseat of the car with the phone and then connect to an HDTV to finish it when you arrive at home.2 Business customers highlight its super-fast 1GHz processor, simultaneous voice and data capability in 4G or Wi-Fi coverage areas enabling Web surfing and more during conversation, and built-in mobile hotspot for up to eight Wi-Fi enabled devices.3 For HTC EVO 4G images visit Sprint’s image gallery.

Amazing at 3G, Unbelievable at 4G
Sprint is the first national carrier offering the next generation of broadband technology today in 43 markets. Sprint 4G delivers download speeds up to 10 times faster than 3G from any other wireless carrier4, giving HTC EVO 4G a faster data speeds than any U.S. wireless device available today. HTC EVO 4G’s exciting features and applications are compelling and powerful in a 3G world, but they become even more amazing when experienced with 4G speeds.