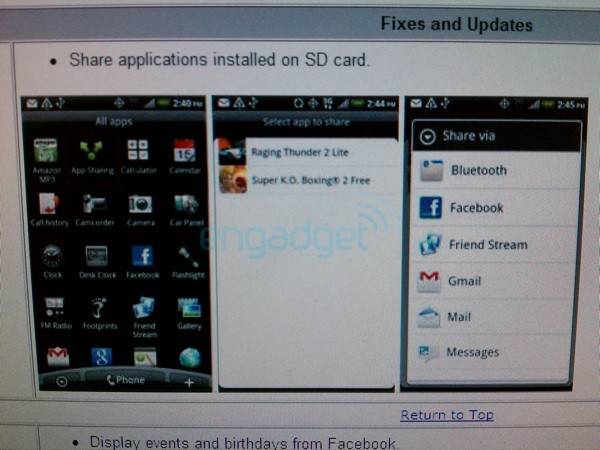 While we wait for August 3rd to come around, and you’re busy checking for software updates like crazy, why not take a few minutes to check out the new features headed to the EVO courtesy of Android 2.2 in some colorful pictures? Yeah, we thought you might like that. It may not be as good as using the features on your own device, but it’s better than nothing, right?

As you can see from the images, the new flashlight application is there and working (well, working as much as we can see, anyway). And considering HTC is including their new App Sharing widget in the update, we’re happy to see the new feature displayed right there in the images. But, there’s something else you EVO owners will be more interested.

Apparently, there’s going to be some car dock-specific functionality that gets released with the new Android 2.2 udpate, too. And, to make it all make sense, there’s going to be an actual car dock that gets released some time in the first weeks of September. Plenty of good things are coming for the EVO, which will work well to make an already great Android device even better. Who’s excited?