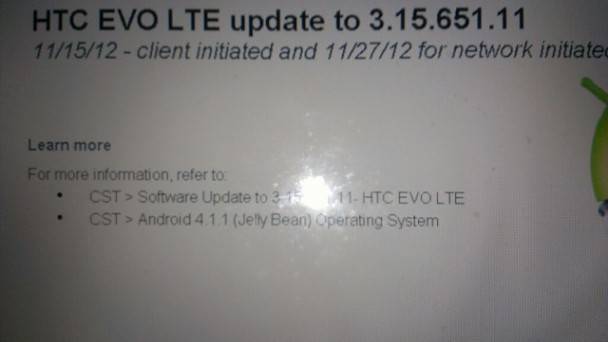 HTC recently released some details stating when they’ll be updating their many devices to Android 4.1 Jelly Bean, but today we have some additional info on their flagship HTC EVO 4G LTE. Some new reports have been flooding in lately that the EVO 4G LTE will actually be updated via OTA update to Jelly Bean this week. Now, according to some leaked documents it looks like today is the day.

Obviously we’ll need to treat this as a rumor for now, but if the leaked internal screenshot tells us anything, EVO 4G LTE owners will be in for some tasty treats today. So far we’ve not received any confirmation that it is indeed rolling out — but we expect to hear more shortly. 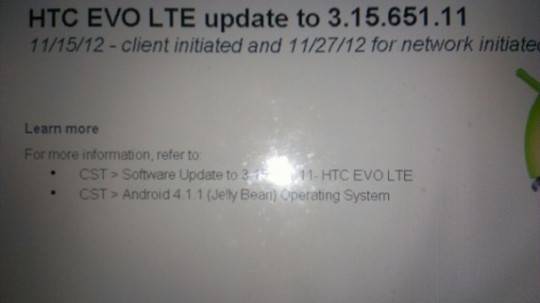 The image above is a leaked document from the Now Network, showing the Android 4.1 Jelly Bean update is set to start rolling out today, November 15th, to the HTC EVO 4G LTE. After looking over a few of the details it looks like this will be a slow rollout over the next week or so, then all devices should be updated in due time. It mentions November 27th specifically today, but most users should receive the update before then.

The last bit of the document states Android 4.0 ICS instead of Jelly Bean, which obviously is wrong, so for now we’re chalking this up in the rumor mill until we actually see devices get updated today. For those that don’t want to wait, you could always grab a stable build of CyanogenMod 10 for the device, but this update is coming straight from HTC with Sense UI included. Stay tuned for more details.