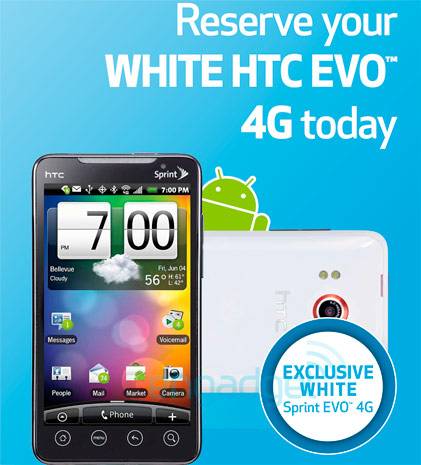 If you’re a fan of the EVO 4G by HTC, but you thought that black color was just too run-of-the-mill, then you can count yourself today justified for your lack of a purchase. Today, thanks to an anonymous tipster sending an image into Engadget, we can see that HTC did in fact make a white version (there had been grumblings, but no confirmations). But, there’s a catch — there always is, right?

You won’t be able to walk into your local Sprint store and get your hands on this one, at least not at first. Starting July 11th, you can head into your local Best Buy, smack down (probably) $199.99 on a new, two-year contract and get your hands on the smokin’ hot white version of Sprint’s first 4G handset. If you want to pre-order it, well, you can do that right now, actually. When will other retailers get their hands on this fine looking specimen? Rumors suggest August 8th for Sprint stores, and other places (like Radio Shack) won’t be getting it until September. Which tells us this definitely isn’t a limited edition of any sorts. Anyone out there thinking this might be the 4.3-inch beast they’ve been waiting for?

MINNEAPOLIS–(BUSINESS WIRE)–Best Buy Mobile, the mobile specialty retail unit of Best Buy Co. Inc (NYSE: BBY), is proud to announce the exclusive launch availability of HTC EVO 4G from Sprint in white, an eye-catching sibling of the HTC EVO 4G that continues to create buzz in the mobile phone marketplace.

“We know that people turn to Best Buy for the latest consumer electronics, and now with our ability to exclusively debut great smartphones like the white version of HTC EVO 4G, they are turning to us for the best smartphones as well”

Beginning June 18, Best Buy is taking pre-orders for the white version of the popular mobile device, which is the first 4G smartphone in America. It officially launches in all Best Buy and Best Buy Mobile stores, as well as BestBuy.com/Mobile on July 11. It retails for $199.99 for a new or eligible upgrade with a new two-year agreement on select plan with Premium Data add-on.

As the only retail and online location to launch HTC EVO 4G from Sprint in white, Best Buy is showcasing a new way to bring smartphones, accessories, applications and other services to market for consumers.

“We know that people turn to Best Buy for the latest consumer electronics, and now with our ability to exclusively debut great smartphones like the white version of HTC EVO 4G, they are turning to us for the best smartphones as well,” said Jude Buckley, chief merchant and marketing officer for Best Buy Mobile. “We are proud to help HTC and Sprint bring such a unique, fashionable and versatile mobile phone to consumers. It is a true connectivity device and exclusively launching this product affirms the position Best Buy Mobile has taken as a preferred destination for smartphones.”

Like the original model, the white version of HTC EVO 4G from Sprint allows consumers to create their own mobile hotspot and share the Sprint 3G or 4G network with up to 8 Wi-Fi enabled devices. Consumers will also get the powerful AndroidTM operating system, including access to thousands of great apps.

Customers lucky enough to get their hands on the this white-hot smartphone at Best Buy will enjoy the added benefit of no mail-in rebates and can Walk Out Working with access to their email, contacts and favorite content set up by a Best Buy Mobile sales associate.