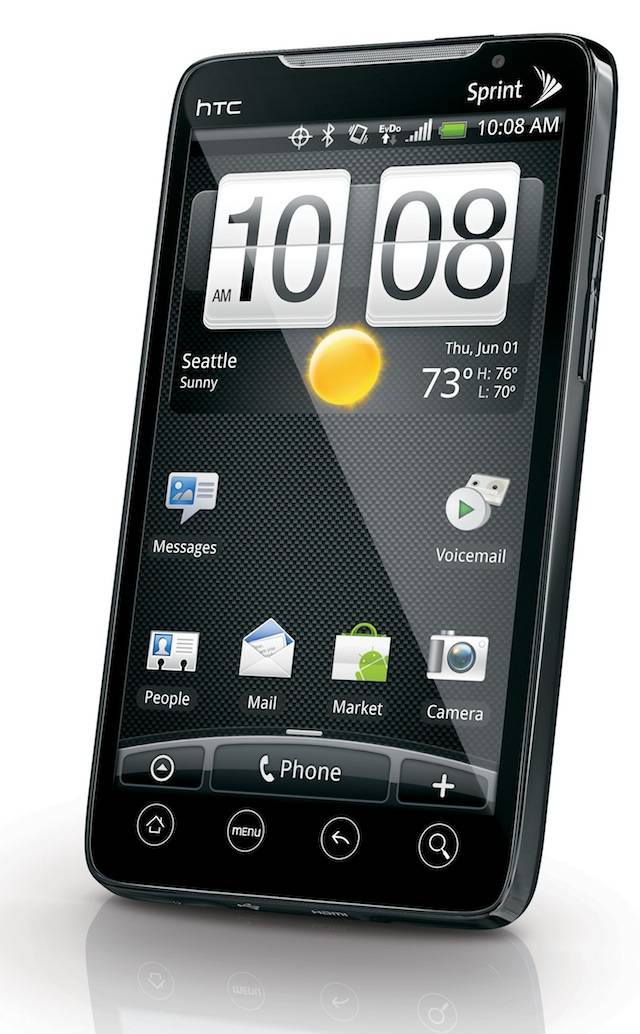 HTC and Sprint have announced the HTC EVO 4G, the smartphone previously known as the HTC Supersonic and the first ever WiMAX Android handset for the Sprint network.  Borrowing plenty from the HTC HD2, the HTC EVO 4G packs a 1GHz Qualcomm Snapdragon processor, 4.3-inch WVGA capacitive touchscreen, HTC Sense UI and Android 2.1.

That’s not all: there’s an 8-megapixel main camera with autofocus and 720p HD video capture, together with a 1.3-megapixel front-facing camera for video calls, as well as WiFi b/g and Bluetooth.  With an adapter cable you can plug the HTC EVO 4G into an HDTV courtesy of an HDMI output, while onboard storage includes 1GB of memory and 512MB of RAM (plus a microSD card slot).

The 4G WiMAX connection can be shared using a MiFi style app, and Sprint are apparently working on enabling both CDMA and WiMAX at the same time so that you can browse the internet while on a voice call.  When outside of a WiMAX area the phone falls back onto EVDO Rev.A.

No word on pricing or what sort of plans will be on offer, but Sprint reckon the HTC EVO 4G will go on sale this summer.  We’re at CTIA Wireless this week, and will have hands-on photos and video with the HTC EVO 4G as soon as possible!

LAS VEGAS, Mar 23, 2010 (BUSINESS WIRE) — Sprint (NYSE: S) and HTC Corporation today announced summer availability of the world’s first 3G/4G Android handset, HTC EVO 4G exclusively from Sprint. HTC EVO 4G delivers a multimedia experience at 4G speeds that is second to none, making it possible to download music, pictures, files, or videos in seconds – not minutes – and watch streaming video on the go with one of the largest pinch-to-zoom displays, at 4.3 inches, in the wireless industry.
Sprint 4G offers a faster wireless experience than any other U.S. national wireless carrier, and Sprint is the only national carrier offering wireless 4G service today in 27 markets. Sprint 4G delivers download speeds up to 10 times faster than 3G1,giving HTC EVO 4G the fastest data speeds of any U.S. wireless device available today.

“Sprint continues to lead the 4G revolution as we introduce HTC EVO 4G to give our customers an experience that is unlike anything available in wireless to date,” said Dan Hesse, Sprint CEO. “Not only is this feature-rich device incredible on our Sprint 3G network, but Sprint 4G speeds will take mobile multimedia, including live video streaming, gaming and picture downloads, to a whole new level.”

Customers will be able to purchase HTC EVO 4G through all Sprint channels and through national retail partners, RadioShack, Best Buy and Walmart, this summer. Pricing will be announced at a later date. Pre-registration begins today at www.sprint.com/evo.

A device beyond compare

HTC EVO 4G delivers a robust list of features, including a 1GHz Qualcomm(R) Snapdragon(TM) processor ensuring a smooth and quick user experience. With dual cameras – an 8.0 megapixel auto-focus camera with HD-capable video camcorder and a forward-facing 1.3 megapixel camera – HTC EVO 4G unleashes the ability to create, stream and watch video that far surpasses expectations of what is possible on a phone today.

With built-in mobile hotspot functionality, HTC EVO 4G allows up to eight Wi-Fi enabled devices to share the 4G experience. Users can easily share an Internet connection on the go with a laptop, camera, music player, game unit, video player, or any other Wi-Fi enabled device.

With integrated HD video capture and 4G speeds, HTC EVO 4G makes slow uploads and grainy video a thing of the past. Now, it is possible to post high-quality video to YouTube(TM) or Facebook, or share moments in real time over the Internet live, via Qik. After these videos have been captured, it is easy to share them on an HDTV via an HDMI cable (sold separately).

HTC EVO 4G features the newest version of the highly acclaimed HTC Sense user experience. Along with all of the HTC Sense features first introduced on HTC Hero, HTC EVO 4G adds a number of new features, including Friend Stream, which aggregates multiple social communication channels including Facebook and Twitter(TM) into one organized flow of updates; a “Leap” thumbnail view to easily switch between home screen “panels”; the ability to download new, interactive widgets; and a “polite” ringer, which quiets the ringing phone once lifted up.

“HTC and Sprint have a strong history of working together to bring consumers technologies and advancements that make their lives easier,” said Peter Chou, CEO of HTC. “We believe that the HTC EVO 4G represents the best of Sprint and the best of HTC working together to bring an unmatched device to the U.S. This combination of HTC and Sprint innovation will allow people to do even more while on the go, faster than ever on the Sprint 4G network.”

Android 2.1 enables a new way to search with pictures instead of words. Google Goggles(TM) works with everything from books, DVDs and barcodes to landmarks, logos, artwork and even wine labels. A picture taken of the Golden Gate Bridge returns all of the information anyone would need to know about the structure. By just taking a picture of several restaurant options, HTC EVO 4G will provide restaurant reviews to ensure the best choice.
Text messaging and email composition feature built-in voice-to-text technology. By simply pressing a microphone button on the screen, messages can be composed by just speaking, making keeping in touch faster and easier than ever.
Through Android Market(TM), HTC EVO 4G users have access to thousands of useful applications, widgets and games to download and install on their phone, with many more to come.
In addition to today’s Android apps, the performance of which will be enhanced by 4G speed, application developers will be introducing new apps that take advantage of 4G power in new ways – games and communications tools and other apps that bring together video, presence and location simultaneously, and capabilities that haven’t yet been imagined. For example, an application developer might create an app that allows a customer to simultaneously watch a streaming sporting event while pulling down stats and conducting a video chat with a friend.

A Sprint 4G developer guide is available today from the Sprint ADP Web site http://developer.sprint.com. The Sprint 4G developer guide explains how to develop on an Android 2.1 handset and how to take advantage of 4G and unique hardware/software capabilities, including how to use a forward-facing camera in an app; how to use HDMI output; and how to build in network detection (3G, 4G or Wi-Fi) to optimize quality of data in an app. The Sprint 4G developer also will include sample apps and source code that highlight these features. It will supplement the Android 2.1 SDK. As a charter member of the Open Handset Alliance(TM), Sprint is actively engaged with the Android community. Sprint has employed an open Internet approach, and the Sprint Application Developer Program has been providing tools for third-party developers since Sprint first launched the Wireless Web on its phones in 2001.

“Sprint and HTC have come together to propel the Android platform into the 4G world with the introduction of HTC EVO 4G,” said Andy Rubin, vice president, mobile platforms at Google. “The Android platform was developed to give people unmatched mobile connectivity to the Internet. By combining this vision with the promise of Sprint’s first-to-market 4G technology, HTC EVO 4G makes accessing thousands of applications from Android Market, using Google(TM) services like Google Goggles, Google Earth(TM) and the all-new Gesture Search, or simply browsing the Web faster, easier and more enjoyable than ever before.”

As the first national wireless carrier to test, launch and market 4G technology, Sprint made history by launching 4G in Baltimore in September 2008. Today, Sprint 4G covers more than 30 million people and expects to have up to 120 million people covered by the end of 2010.

In 2010, Sprint expects to launch service in multiple markets, including but not limited to, Boston, Denver, Houston, Kansas City, Minneapolis, New York City, San Francisco and Washington, D.C. Sprint is harnessing the power of 4G as the majority shareholder of Clearwire, the independent company that is building the WiMAX network. Sprint is the only national wireless carrier to offer 4G services on the Clearwire WiMAX network.

Sprint Nextel offers a comprehensive range of wireless and wireline communications services bringing the freedom of mobility to consumers, businesses and government users. Sprint Nextel is widely recognized for developing, engineering and deploying innovative technologies, including two wireless networks serving more than 48 million customers at the end of the fourth quarter of 2009 and the first 4G service from a national carrier in the United States; industry-leading mobile data services; instant national and international push-to-talk capabilities; and a global Tier 1 Internet backbone. The company’s customer-focused strategy has led to improved first call resolution and customer care satisfaction scores. For more information, visit www.sprint.com.

HTC Corporation (HTC) is one of the fastest growing companies in the mobile phone industry. By putting people at the center of everything it does, HTC creates innovative smartphones that better serve the lives and needs of individuals. The company is listed on the Taiwan Stock Exchange under ticker 2498. For more information about HTC, please visit www.htc.com.

1 “Up to 10x faster” based on download speed comparison of 3G’s 600 kbps vs. 4G’s 6 Mbps. Industry published 3G avg. speeds (600 kbps-1.7 Mbps); 4G avg. speeds (3-6 Mbps). Actual speeds may vary. Sprint 4G currently available in over 25 markets and counting, and on select devices. See www.sprint.com/4G for details. Not all services available on 4G and coverage may default to 3G/separate network where 4G unavailable.