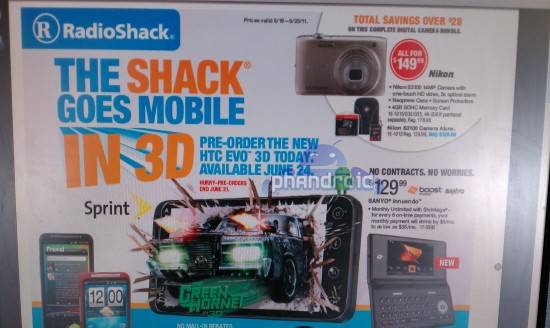 We all first saw the EVO 3D back at CTIA, we even had some hands-on with it. There has been talk and rumors about a release date for a while now but we still have not heard anything concrete. Apparently a flyer recently found by Radio Shack is noting the EVO 3D will be for sale starting June 24th.

A few sources in May mentioned pre-orders were under way but most were all a secret, from Best Buy Mobile to Sprint themselves. Radio Shack has been accepting pre-orders for a while now for this device, but it looks like you might want to go pre-order sooner than later as this device should be a big hit just like the EVO was.

So does Radio Shack know something we don’t or are they just looking for some action and additional orders. Hopefully we will be hearing more details regarding the EVO 3D soon direct from Sprint. I’d expect them to release some info any time now, especially after T-Mobile just officially announced pricing and availability for the Sensation 4G. Both are great devices, but what would you rather have in your hand the EVO 3D or the Sensation 4G?