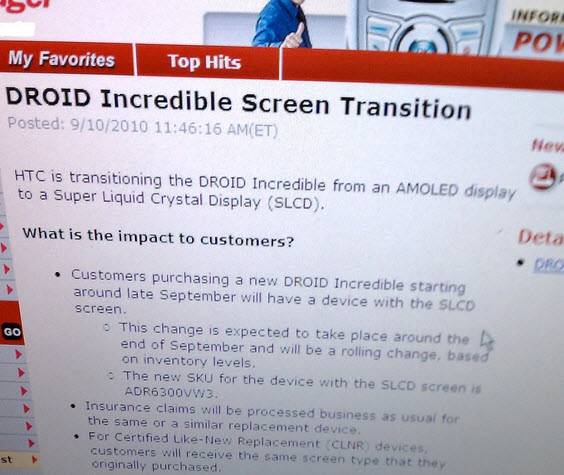 The idea of having your HTC Droid Incredible outfitted with a Super LCD display may not be happy news for most, but it’s the sad truth of the day. After we broke the news that HTC had been forced to work with Sony to produce upcoming Incredible handsets a couple of months back, it looks like the solution has finally arrived, if this new screenshot is any indicator. It’s reportedly a Verizon memo, circulating through their internal servers, and as you can tell from the wording, it looks like SLCD is beginning its roll-out soon.

While the initial announcement said that by “the end of the Summer,” SLCD would be implemented, it looks like Verizon is narrowing that down a bit, and saying that by the end of September, the Incredible will start shipping with the new display. Removing the AMOLED display, which is manufactured by Samsung and has been hit with a major shortage, means that some folks may opt for other handsets. Even if HTC backs the idea that SLCD is just as color-rich and vibrant as AMOLED.

One very key thing to mention here: at the very bottom of the memo, you’ll notice that if you’ve got yourself an Incredible with an AMOLED display, and you need to get it replaced for whatever reason, you’ll get an Incredible back with the AMOLED display — not an SLCD-based device.