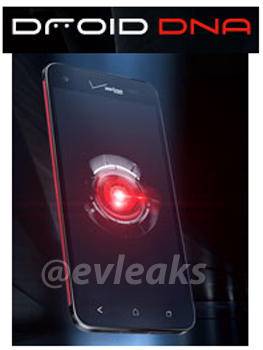 It looks like we might finally have a launch window for the long-rumored HTC DROID DNA. If you read Android Community on a regular basis, you’ll know we’re quite fond of the folks over at @evleaks, and they’ve delivered once again today. @evleaks has posted another picture of the DROID DNA, along with saying that it’ll be available at Verizon in early December.

Considering we’ve just entered November, the DROID DNA should be available relatively quickly. The DROID DNA will be Verizon’s version of the HTC J Butterfly that was revealed for Japan last month, and as such, it will feature a lot of the same specs. It’s still got that beautiful 5-inch screen, which is an HD Super LCD 3 display with a mind-numbing 440PPI resolution.

On the inside we’ve got a Qualcomm Snapdragon S4 quad-core processor working in tandem with 2GB of RAM, so this should be a pretty beastly device. We’ve also got 16GB of internal storage to take advantage of, an 8-megapixel camera on the backside, and a 2,020mAh battery to power it all. In short, the DROID DNA should be a pretty high-end device, and if you want a phone with a big screen and great internals, this is it.

As stated above, @evleaks says this bad boy should be hitting Verizon in early December. We don’t know the price yet, but with those specs and that screen, don’t expect this thing to be cheap. We’ll update you when we know more, so keep it tuned right here to Android Community for additional details!