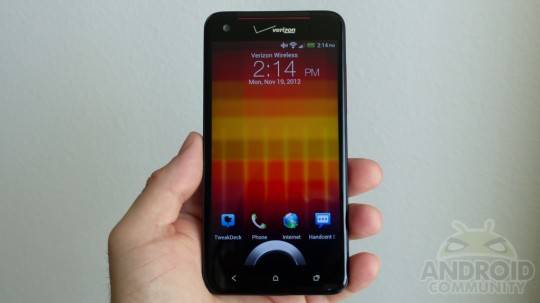 Some new details and leaked specs have potentially confirmed a new smartphone for those on Verizon Wireless. The popular 5-inch 1080p DROID DNA has only been available for a few months, and many believe this is why we might not see the upcoming HTC M7 hit Verizon Wireless. However, today reports have surfaced that a DROID DNA+ (like the One X+) could be coming soon as the M7.

For those that don’t remember, the HTC DROID DNA was initially leaked with the codename DLX for Verizon. Now we’re seeing another device called the DLXPLUS with essentially the same specs as the recently leaked HTC M7. The screen will be slightly smaller than the DNA, but everything else should be vastly improved.

According to Droid-Life the specs will match that of the M7 which is rumored to arrive on all major US carriers, and this one will be for Verizon. Specs include a 4.7-inch 1080p display, the same 1.7 GHz quad-core Snapdragon S4 Pro processor, 2GB of RAM, 16GB internal storage (and micro-SD slot) a 13 megapixel rear and 2 mp front camera, and finally Android 4.2 Jelly Bean with HTC Sense UI 5.0 on board.

The DLX is the Verizon DROID DNA, so the DLXPLUS could very well be their next flagship M7 for big red complete with 4G LTE. Now the only concern is when this device will make it to the market. The M7 will be announced on February 19th and we’ve heard a mid March release. Hopefully Verizon will hit a similar timeframe as the other US carriers. We’ll know soon enough so stay tuned for additional details.