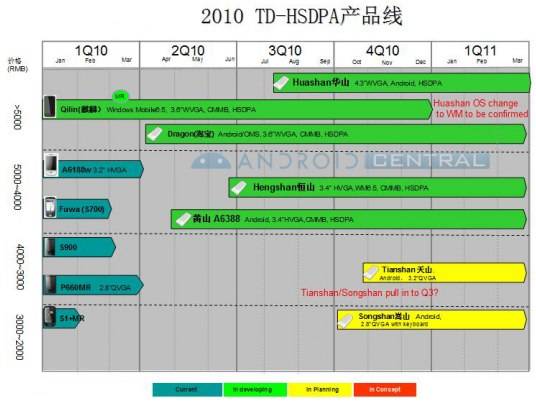 A leaked Dopod roadmap has filled in some launch details for the HTC Dragon, as well as spilled the beans on a number of other smartphones headed to the Chinese market this year.  The Dragon – a 3.6-inch WVGA HSDPA Android phone – is expected to arrive there in Q2 2010, and be shortly followed by the A6388, a cheaper 3.4-inch HVGA Android device.

There’s also news of a 4.3-inch WVGA device, the Huashan, which seemingly started life as an Android smartphone but which is apparently being changed to Windows Mobile.  That will drop mid-way through Q3 2010, and be followed in Q4 2010 by the 2.8-inch QVGA Songshan – and Android phone with a keyboard – and the Tianshan, a 3.2-inch QVGA Android phone shortly after.