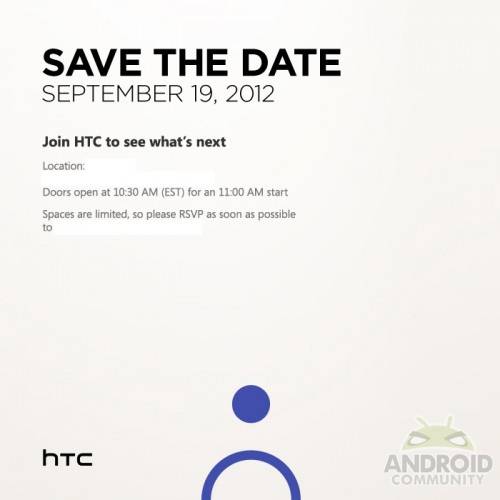 Not to be outdone by the Apple event on the 12th, or the Motorola event set for tomorrow, HTC has just issued their own save the date event announcements to the press inviting us all to enjoy “what’s next” later this month. They sure don’t give us many hints but we’ll be seeing their next device in NYC in a few weeks.

Our original thought was some upcoming Windows 8 smartphones since IFA showed plenty of those from other manufacturers, but then we got this same event invite over here at Android Community so we can expect some Android announcements to follow. Now we have to play the guessing game.

The only hint reads “Join HTC to see what’s next.” That is all they had to say regarding this announcement. The odd thing is the weird blue symbol on the bottom of the invite you see above. We aren’t too sure what that is although it resembles the Google Now voice search capabilities of Android 4.1 Jelly Bean and the Nexus 7.

We all know Jelly Bean is coming to their recent devices soon but that’s hardly a reason for an event so some hardware is certainly expected. HTC’s been rather quite as of late so we’ll most likely see the Desire X they announced at IFA and if we are lucky that rumored 5-inch device. HTC’s 5-inch 1080p resolution Galaxy Note II rival broke cover this weekend and chances are that device could finally be unveiled. There is also talk of an HTC One X+ for T-Mobile — so that’s a possibility. We are hopeful these are among the devices they’ll have to announce.

Android Community will be live in NYC to capture all the news, details, pictures, and video of whatever comes from HTC’s September 19th media event so stay tuned for further details.