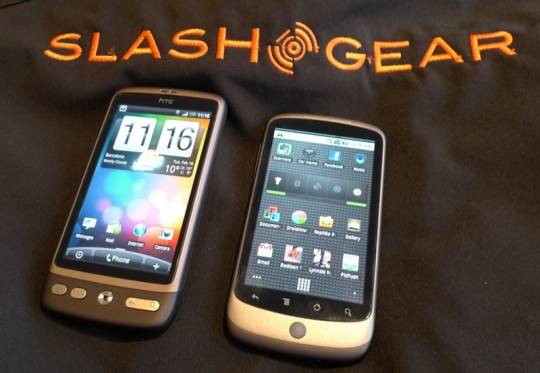 The Desire has been one of the biggest announcements as far as upcoming Android handsets. It was almost instantly referred to as the Nexus One with Sense UI. How would HTC attract buyers to this phone when it has the same form factor as the Nexus One? Our friends over at Slashgear has done a hands on comparision of the two.

As far as specs go, the two phone are almost identical. The Nexus One is thinner and has a traditional tracball. The Desire has 64 more MB’s of RAM and an optical tracball. Also, the Desire lacks both the active noise cancellation and the triband HSDPA/WCDMA of the Nexus One, making do with just dualband 900/2100. But the Desire does have an 8 GB SD included and the absence of the aforementioned specs will cut the cost of the device. They both have the same 1,400mAh battery, it seems as though HTC played around with some settings because they managed to get more life out of it. 3G standby for the Nexus One is up to 250 hours, compared to up to 360 hours for the Desire, though 3G talktime is up to 420 minutes for the Google device but 390 minutes for the HTC.

For those in the US, the Nexus One remains the obvious choice. That’s partly due to the fact that the Desire has no US 3G support. This could change later in the year if a few carriers decide to pick it up. Since the Nexus is a Google only phone with no custom UI, it will surely get updates quicker than the Desire. And a lot of people are not fans of Sense and prefer the stock look. At the end of the day, they both are great phones and which ever you choose to buy will surely satisfy your handset needs. Check out the Nexus hands on and head over to slashgear for a more in depth comparison.