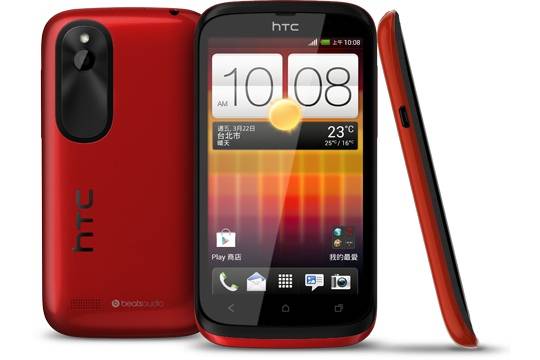 Details of the HTC Desire P and the Desire Q were leaking throughout the month of March. HTC then offered an official announcement for the Desire P a few days back and as of today, it looks like we now have the same for the Desire Q. The catch here, the handset is not what anyone would consider high-end or exciting. Not to mention, the initial availability seems to be limited to those in Taiwan.

That aside for a moment though, HTC has launched the Desire Q with Android 4.0 Ice Cream Sandwich. Yes, in a time where Jelly Bean is preferred and people are beginning to think of Key Lime Pie — the Desire Q still has the older dessert. Trying to forget that, the remaining specs are not all that exciting and begin with a single-core 1GHz processor and 4-inch (800 x 480) display.

Remaining specs for the HTC Desire Q include 4GB of internal storage, a microSD card slot, 512MB of RAM, 1650 mAh battery, Wi-Fi, Bluetooth, GPS and a 5 megapixel rear-facing camera. Aside from the hardware specs, HTC has released the Desire Q in a variety of colors to include red and black with a white model coming later.

All said and done, the one saving factor may be in with the pricing. That is to say the Desire Q is priced relatively inexpensive. The handset will be selling for NT$6,990, which is roughly $235 in terms of US dollars. With that, the Desire Q is not expected to see a widespread global roll-out, but if nothing else, at least we can put another series of rumors to rest.